‘Belief carried us through’ 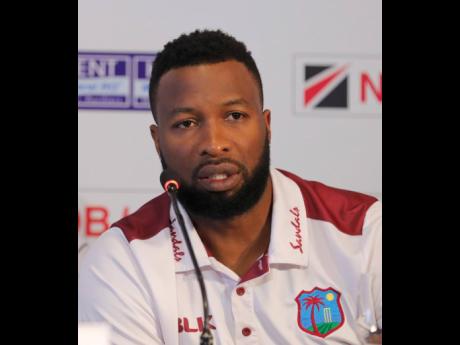 Kieron Pollard has hailed the character shown by West Indies’ batsmen after they survived another stern examination by Sri Lanka’s spinners to win the final Twenty20 International and take the three-match series here Sunday night.

Not for the first time in the series, the home side suffered a rapid batting collapse in pursuit of a modest 132 at Coolidge Cricket Ground but recovered to win by three wickets with an over to spare.

“Obviously it proved difficult. They have three world-class spinners in their line-up and I thought they came and bowled excellently,” captain Pollard said.

“I thought they bowled the right lines and the right lengths and yes, they had us a bit bamboozled at the end of the day. But having said that, I think the belief in the dressing room and within the group is what carried us through.”

Hasaranga then combined with left-arm spinner Lakshan Sandakan in another brace of three-wicket hauls to fire Sri Lanka to a convincing 43-run win in the second game last Friday.

On Sunday night, Sandakan grabbed three more wickets and Hasaranga two as the Windies tumbled from 37 without loss to 105 for seven before all-rounder Fabian Allen smashed a six-ball unbeaten 21 in a 29-run, eighth-wicket stand with Jason Holder (14 not out) to see West Indies over the line.

“I can only imagine some of the chatter that would have been going on about what was transpiring, but I must give the guys credit,” Pollard stressed.

“Fabian at the back end holding his nerve but, more importantly, I thought Jason Holder in that over against Hasaranga, that was the turning point for us. He used his experience, decided he was the one going to bat those six balls for the team and give Fabian the free will to go and continue to hit boundaries so well done to him.”

The form of veterans Chris Gayle and Fidel Edwards has raised question marks, especially after their recalls sparked debate among pundits prior to the series.

Gayle, 41, who had not featured for West Indies in nearly two years, looked a shadow of himself and managed only 29 runs from three innings while the 39-year-old Edwards took a single wicket from six overs in the first two matches in his first appearance for the Caribbean side in a decade, before being dropped for the final game.

However, Pollard defended their inclusion, contending their contribution off the field had been invaluable.

“You see these guys walking around, you see these guys in the hotel at different times and they’re chatting with the youngsters, showing that type of unity and sharing experiences and wanting to do well,” Pollard pointed out.

“It’s something that has been missing for a while and we’re happy. Again, the doors are open for each and everybody to come back and play and lend their experience because it’s going to take each and everyone of us to go to that World Cup and do well.”

West Indies are set to defend their T20 World Cup title at the tournament slated for India next October.