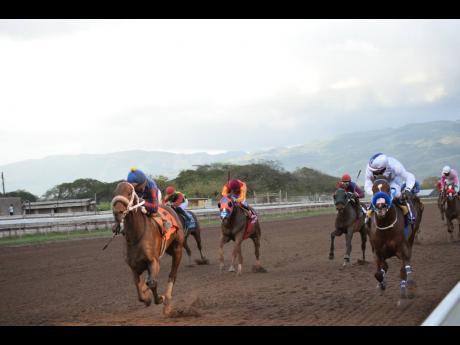 CALCULUS charged at REGNANT inside the last half-furlong of the Sir Howard Stakes yesterday to nail the speedster close home, winning the six-furlong race by a half-length with Dane Nelson aboard.

REGNANT, a winner on debut at five furlongs straight a month ago, circled rivals from the widest draw in the 10-horse field to take command at the half-mile, posting a swift 22.4 for the first two furlongs.

However, the Midnight Hawk-Mama Blossom quickster wasn’t given a break on the lead, hounded by MINIATURE MAN, KING’S MAGICIAN, and BILLY WHIZZ into the straight.

Racing for the first time since December 27, CALCULUS rolled along, seventh leaving the three-furlong marker, but was moving well, heading to the rail, approaching the home turn.

Finding his best stride in the straight, CALCULUS quickly motored into third along the rail a furlong out as the chasing pack wilted, closing as a team with BILLY WHIZZ on the outside.

REGNANT ran out of steam as the wire approached while CALCULUS hit full stride, allowing Nelson to score a measured victory, clocking 1:14.1, closing a two-timer for the co-champion jockey, who had earlier won the fifth event aboard MAMACITA at four furlongs straight.

Shane Ellis and Alford Brown combined to win back-to-back races, starting in the third at five and a half furlongs with three-year-old debutante TRUE AL SKY, who chased stablemate BALLATELLI and took over midway the straight as the 1-2 favourite.

The jockey-trainer combination completed the double with prohibitive 1-5 favourite CUSTER, who disputed the lead with SIR KEL before pulling away inside the last furlong at five and a half.

Racing continues at the weekend with a third straight Saturday-Sunday meet.