'Able' to do better 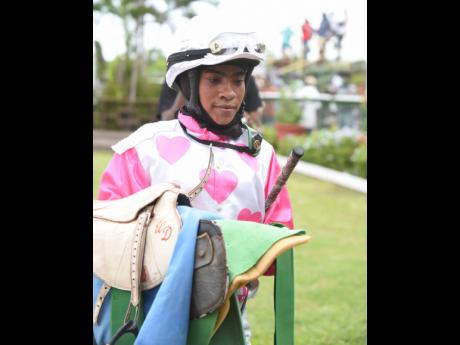 Having served a 15-day suspension, jockey Abigail Able says she has learnt from her mistakes and she is hoping for a standout performance when she returns to action at Caymanas Park on Thursday.

Able and jockey Richard Parchment were both suspended by the Jamaica Racing Commission and fined $20,000 after they were involved in a fight on January 22 at the track.

Able, 24, is set to partner FORMAL GLADIATOR in the ninth race for trainer Welsh Soutar on Thursday. She said that she is now a much better person and is now focused on being positive and more disciplined at the track.

“I am grateful and thankful that I am going back to ride, because this is my job,” she said. "I have learnt from my mistakes and I am just excited and looking forward to great things on Thursday.

"While I am out not riding, I took some time to reflect on things and mistakes, so right now I am ready, and I just want to go out and win some races.

“It was a bit hard being out for so long because this is my job, and just not being able to earn from it was tough for me."

Able, who has been riding since 2018, said that she is delighted with the recent announcement that Supreme Ventures Racing and Entertainment will be offering a $100,000 incentive to the female jockey with the most wins at the end of each quarter.

"I will be going after this, but there will be a lot of competition for it; but may the best female win," Able said. "I think this is excellent for us because it basically gives us a

push-start, knowing that money is on the line for us, and everybody will be going after it.

"It will also push us to work a lot harder to seek a lot more rides, because this is a massive incentive for the females."