Sprint to the finish!

Edwin Allen hold on to advantage on drama-filled Day Three 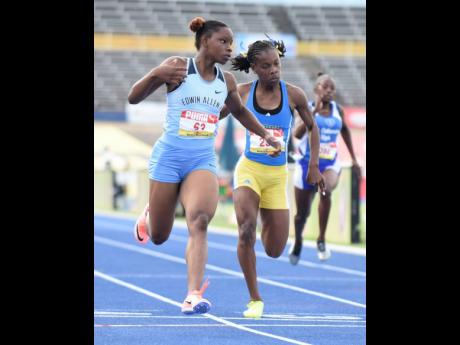 The highly anticipated sisterly sprinting duel, between Edwin Allen’s twin tandem of Tia and Tina Clayton, did not materialise at the ISSA/GraceKennedy Boys and Girls’ Championships yesterday after the former’s shock false start in the Class Two Girls’ 100m final at the National Stadium.

However, in the end, with her sister still shedding tears at trackside, a visibly shaken Tina, who entered the championship with the fastest time this season, managed to compose herself and cross the line comfortably in front of the pack, in 11.38 seconds, to deliver the expected Clayton win.

Hydel’s Kerrica Hill made the most of the extra spot on the podium to grab second place in 11.61 seconds, with her teammate, Alana Reid, finishing third in 11.65 seconds.

“I was focused coming out before the false start, (but) when she (Tia) false-started, it kind of threw me off a bit because I got a bit emotional. So I tried to relax myself a bit to win the race,” Tina told The Gleaner.

Incidentally, Tina shared that yesterday was their mother’s birthday, and while they wanted to deliver a quinella as a special honour, she is well aware that the win and the effort is more than enough.

Head coach Michael Dyke said that Tia has already recovered from the disappointment and is ready to help her team to more points in the sprint relays tomorrow.

“She is determined to come out and to make amends for the false start,” Dyke said.

Despite the setback, Edwin Allen made good use of the 100m sprint finals, winning three of the four classes, with Theianna-Lee Terrelonge taking the Class Four title in 12.53 seconds ahead of Poshanna-Lee Blake (St Jago), 12.74, and Marria Crossfield (Vere), 12.85.

Brandy Hall left no doubt in the Class One final, crossing the line in 11.72 seconds, with Hydel’s Shenese Walker, 11.86, and Holmwood’s Shashieka Steele, 11.88, taking the other podium spots.

There were one-two finishes in the Class Three Girls’ 1500m finals for Holmwood Technical, with Andrene Peart, 4:50.36, taking the win ahead of her teammate, Cindy Rose, 4:52.03.

With Edwin Allen continuing to lead after 23 finals with 184 points to St Jago’s 158, there is little room for error heading into the final two days of the championships. Hydel High sit in third place on 132 points, with Holmwood, 63.50, and Wolmer’s Girls, 45, rounding out the top five.

Four finals are on today’s schedule for the girls, including the Triple Jump Open, Class One discus, Class Four High Jump, and 400m hurdles Open.