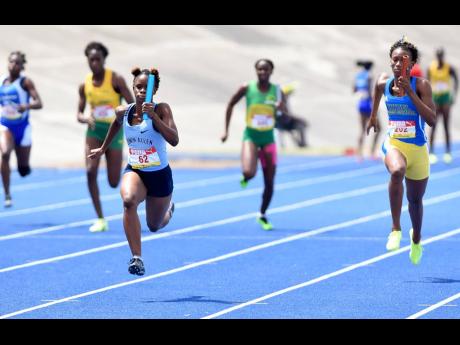 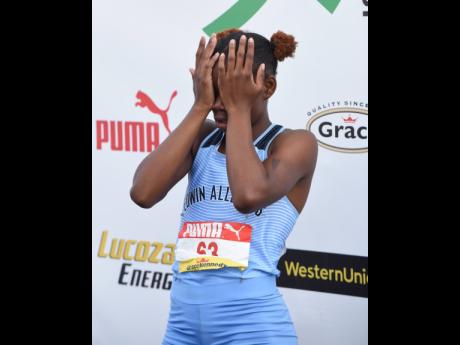 File
A dejected Tina Clayton, despite her victory in the Class Two Girls 100m final on Thursday. Clayton was disappointed that her twin sister Tia, who says the 100m is her favourite race, had a false start.
1
2

After Edwin Allen High School’s Tia Clayton false-started in the Class Two girls’ 100m final at the ISSA/GraceKennedy Boys and Girls’ Athletics Championships (Champs) on Thursday, her twin sister Tina who won the title said that she was confident...

After Edwin Allen High School’s Tia Clayton false-started in the Class Two girls’ 100m final at the ISSA/GraceKennedy Boys and Girls’ Athletics Championships (Champs) on Thursday, her twin sister Tina who won the title said that she was confident that Tia would make amends in the Class Two 4x100m relay final yesterday.

She had every reason to be.

Tia anchored the Edwin Allen team not only to victory, but to setting a Champs record of 44.81 seconds.

“I knew that since she didn’t get to finish the 100m, she would come out here and do very well,” Tina told The Sunday Gleaner. “So I am glad that that she came here and performed well.”

Edwin Allen had safe exchanges throughout and when the baton was given to Tia for the final leg, she ran with purpose on their way to the record, a record that stays in the Edwin Allen camp. Until yesterday, the previous record was 44.88s, set in 2015.

The much-anticipated 100m battle of the sisters did not materialise because of Tia’s disqualification. Despite Tina winning the title in 11.38s, she was still not satisfied because it was not the sibling podium finish that they envisioned, especially since it was on the occasion of her mother’s birthday. Tia and Tina finished one-two respectively in the Class Three 200m final in 2019, but Tia was not entered for the Class Two 200m which was won by Tina in 23.45s yesterday.

With how the events of Thursday evolved, Tina said that her sprint double victory was one she was determined to have to make her sister proud in her absence.

“I was a bit disappointed in the 100m because I really expected my sister to win and for me to come second because I know that was her favourite event. But I just came out here and did it for her,” Tina said.

The victory also gave Edwin Allen much-needed points as they clinched a seventh consecutive title yesterday, a title that Tina said meant a lot to her and the team considering the late start to their preparation and a difficult season because of COVID-19 complications.