Whyte making her mark ahead of Trials showdown 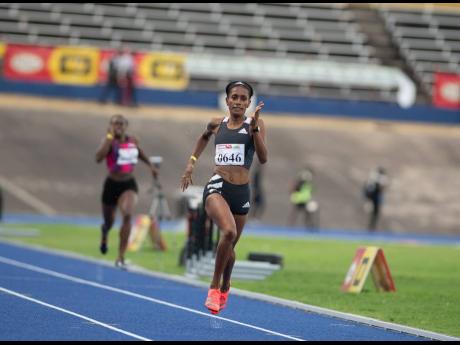 At the same meet where sprint sensation Briana Williams lowered her national under 20 100 metre record to 10.98 seconds, Jamaica’s stocks in the women’s 400 metre hurdles rose significantly.

Leading the way was Ronda Whyte, who produced the second fastest time of her life, a season’s best 54.33 seconds to send strong signals ahead of important assignments.

Her progress and a sub-55 seconds clocking for young Shiann Salmon, has Whyte’s Sprintec coach Maurice Wilson, predicting a fast race at the National Senior Championships later this month.

Running at the Duval County Challenge American Track League meet in Jacksonville, Florida on May 31, Whyte finished fast to nab second place behind American Shamier Little, who established a world-leading time of 53.12 seconds. Salmon placed third with a personal best of 54.97 seconds.

“I’m very happy with her performance. I just hope she can maintain and improve on what she has done yesterday,” Wilson said.

In his review of a race where the CAC Games champion just missed her best ever run of 54.29 seconds, coach Wilson was pleased that their efforts in training were bearing fruits.

“I’d asked her to try and see if she can run a season’s best so anything below 55.1 would have been great, Wilson shared in reference to a clocking of 55.11, which Whyte produced in Irvine, California two weeks ago.

He described Whyte’s big run as a special performance that came after they had ironed out some technical problems in practice at the GC Foster College for Physical Education and Sport.

“What is amazing is that on Thursday, when we were practising after she came back from California, she was missing her rhythm to the first two hurdles. Everybody got upset and we called it a night or an evening and we came back to practice on Saturday morning before the meet,” Wilson recalled.

The Saturday training session helped Whyte to the third fastest time of the year.

“I decided that I wasn’t going to leave until we got, at least, some inclination of what we wanted to do. We spent the time and eventually we started to get in our rhythm and I told her she was going to do very well,” he added.

The man who coached Janieve Russell to gold at the 2012 World Under 20 Championships title and Ristananna Tracey to World Championships bronze in 2017, is looking ahead to what he expects will be a fiery clash at Trials.

With Russell clocking 54.75 seconds at the JOA/JAAA Olympic Destiny Series and World bronze medal winners Tracey and Rushell Clayton priming for big meets to come, Wilson expects the National Championships race to be a special one.

‘’Based on the level of competition and competitiveness I have seen among the young ladies, I do believe that you may run 54 low and don’t make the top three, which is not impossible,” Wilson predicted.