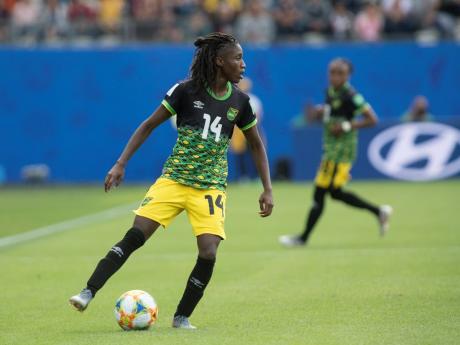 Deneisha Blackwood scored the only goal of the game in the 53rd minute as the Reggae Girlz marked their return to competitive action in over a year with their first win of 2021.

Jamaica had chances to take the lead in the first half and should have made it 1-0 in the 24st minute from the penalty spot after Jody Brown was fouled in the box by Nigerian defender Glory Ogbonna. However Blackwood’s spot kick was comfortably saved by Nigerian goalkeeper Tochukwu Oluehi. Jamaica had another chance to score minutes later as Brown played the ball through to Konya Plummer, but her shot was saved by Oluehi.

Nigeria had a chance of their own minutes before the break when Francisca Ordega deflected a shot from a corner and Jamaica goalkeeper Rebecca Spencer was forced into a save on the line. Ordega claimed that the ball crossed the line but the referee ruled no goal.

Nigeria thought they had took the lead early in the second half when Amarachi Okoronkwo fired home from close range after being put through on goal by Vivian Ikechukwu, but the goal was ruled out as Okoronkwo was deemed offside. Jamaica were under pressure for the latter stages of the second half and Michelle Alozie had a great chance to equalise for the Nigerians with less than 10 minutes remaining, but her long range effort hit the post.

Jamaica will next face the United States of America, the world champions, on Sunday.