Women steal the show at Trials 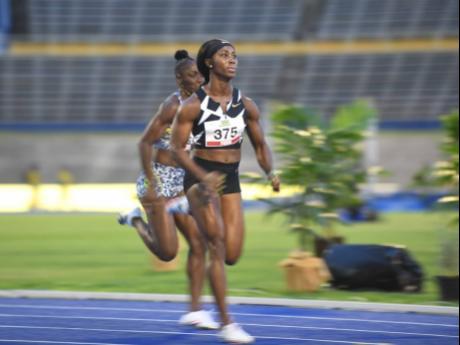 It was sprinting at the highest level at the National Stadium last night as the country’s top female athletes gave a sneak preview of what is to come today in the Jamaica Athletics Administrative Association’s National Senior Championships.

Both Shelly-Ann Fraser-Pryce and Elaine Thompson Herah, the world number one and three went through the motions after winning the first two heats with little effort in 10.97 seconds and 10.96s, respectively.

Thompson Herah won ahead of Natalliah Whyte (11.14s) and Trinidad and Tobago’s Kelly-Ann Baptiste, third in a season best 11.19s. Shockoria Wallace of MVP Track Club was fourth in 11.22s.

Undoubtedly, it was Shericka Jackson , competing in the third heat, that had all watching at the National Stadium in a frenzy. Known for her 400m exploits, Jackson, who came into the meet with a then personal best 11.02s, got a great start to upstage MVP teammate and world number four Natasha Morrison (11.06s) to win in a big personal best 10.91s, the fastest time on the night. Third went to Shian Hyde in 11.28s.

The final heat saw a keen battle between Briana Williams and Kemba Nelson, with Williams winning in 11.00s, ahead of Nelson (11.05s), and Kevona Davis third in 11.19s.

In the men’s quarterfinals, it was the 2012 World champion, Yohan Blake, who led all qualifiers. Competing in Heat Two, Blake got out of the blocks quickly and shut it down at 60m to cruise to victory in a season’s best 10.03s. Oshane Bailey of Sprintec was second in 10.26s, and Jelani Walker of Pure Athletics third in 10.32s.

America-based Davonte Burnett of University of Southern Carolina was the next best qualifier after winning his heat in 10.05s to equal his season’s best. Senoj-Jay Givans of Tumbleweed Track Club was second in 10.20s, with Andre Ewars third in 10.22s.

Tyquendo Tracy won Heat One in 10.13s, the same time done by second-place Nigel Ellis, with third going to Romario Williams in 10.27s.

Julian Forte captured the final heat in 10.08s, the same time by second-place Oblique Seville, which was a personal best for him, with third going to schoolboy Bryan Levell, in a personal best 10.25s.

Former national champion Jaheel Hyde is the fastest qualifier after first-round action in the men’s 400m hurdles. Hyde produced a season’s best 48.14s to win his heat ahead of Kemar Mowatt, second in 50.50s, with third going to Troy Whyte in 50.83s.

Andre Clarke of Puma won the opening heat in 49.38s to be the second-fastest qualifier. Shawn Rowe was second in 49.57s, with third going to Owayne Russell in 50.48s.

There was no preliminary round action in the women’s event as only eight athletes turned up at the start.