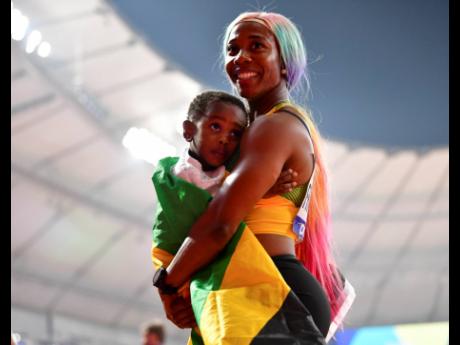 File
Fraser-Pryce and son, Zion, at the World Championships in 2019.

Among the females, Fraser-Pryce will be joined by defending Olympic Games 100m and 200m champion Elaine Thompson Herah, who was third in both events at the recent National Senior Championships.

Shericka Jackson, the surprise silver medallist in both sprint events, will complete a strong sprinting trio for the Jamaican team.

Other notable females included are Stephenie-Ann McPherson and Candice McLeod, who both posted personal best and sub-50 seconds times in the 400m after coming first and second in 49.61 and 49.91 seconds, respectively.

Meanwhile Gayle, the winner of the men’s long jump at Trials and the gold medallist from the 2019 World Championships in Doha, Qatar, is the biggest name among the males.

He will be joined by former World 100 metres champion Yohan Blake as well as Fedrick Dacres in the Discus.

The most notable absentee is 2016 Olympics 110m hurdles champion Omar McLeod, who was not named to the team after finishing last at the National Senior Championships. McLeod, who subsequently complained that he was feeling cramps due to the scheduling of the event, will miss out on the opportunity to defend his Olympic title.