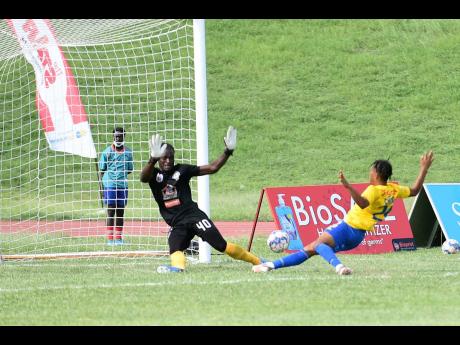 Harbour View striker Oquassa Chong is proving to be very difficult for his opponents to stop in this year’s Jamaica Premier League competition. His spectacular performance helped the Stars of the East to a comfortable 2-0 victory over Mount Pleasant Academy at Stadium East yesterday.

The 20-year-old Chong, who is a former Jamaica College Manning Cup standout, netted for Harbour View in the 21st minute. He then returned to provide a brilliant assist for Lennox Russell to double Harbour View’s lead in the 58th.

Chong, who tormented the Mount Pleasant Academy defenders with his pace and clever off-the-ball movement, is now the competition’s leading scorer with three goals from as many matches.

However, Chong’s joy turned into sadness after he went down injured after being hit in the face by Mount Pleasant’s Sue-Lae McCalla in the 69th minute and was later substituted.

“Young Chong continues to really provide for us,” Bernard said. “He is one cog within the wheel and he is fairly performing his duties. Fortunately for him, he is the one that gets on the end of passes and assists.

“There are other players out there that are contributing as well but, for now, Oquassa seems to be the man leading us,” Bernard said. The victory was Harbour View’s first win of the season after they drew their two previous matches in the competition.

Chong, a livewire, put Harbour View in front when he arrived at the back post to tap in a well-measured cross from Tyrese Williams. Harbour View, who dominated the ball possession for most of the first half, came close to doubling their advantage in the first half but they were let down because of faulty shooting from their other attackers.

Harbour View doubled their lead 13 minutes into the second half when Chong provided a beautiful right-sided cross for Russell who dribbled around his marker to fire home past goalkeeper David Swaby.

Mount Pleasant Academy coach Paul Davis was then forced to make several substitutions to his team, but Harbour View held on for the victory.

Davis said his team didn’t play according to their game plan, because they were sluggish for most of the match.

“We started out very slowly against a team that is moving the football very quickly and they were a lot more aggressive than us. So that was our downfall in this match,” Davis said. “I think that we really got into the match when we brought on some fresh legs and we got a bit more energy in the team but that wasn’t enough for us,” he said.

With the last kick of the game, Damano Solomon gave Portmore United a 1-0 win over Molynes United in the first Jamaica Premier League game at the Stadium East field yesterday.

Solomon latched on to a free kick by Ricardo Morris in the sixth minute of second-half stoppage time and snatched victory in a game that looked destined for a draw.

It was a heartbreaking loss for a Molynes United team that would have earned a deserved share of the points with a fighting display.

In the end, Portmore United secured their second win from three games and provisionally jumped to the top of the league with six points on the first day of the third round.

Molynes United remained in eight spot on a point from two games.

Winning coach Ricardo Gardner was more than happy to secure three points when it seemed he would take only one.

“Football is like this sometimes,” he said. “We would love to have put our chances away but, unfortunately, it wasn’t like that.

“I think our keeper made a very good save to keep us in the game. We left ourselves a little bit too open at times and gave our opponents to go through on our keeper, but we just have to improve on this.”

Molynes United coach Calvert Fitzgerald said it was disappointing losing with basically the last kick of the game.

“I thought Portmore played well, we countered and, with the ebb and flow of the game, if I had gotten a point I would have been satisfied,” he said.