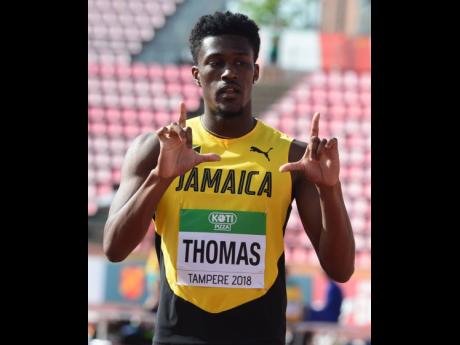 Damion Thomas has been achieving his track and field goals ever since his first race in Jamaica five years ago. Now, with practice going well, he is getting ready to achieve another goal – competing for Jamaica in the Olympic Games in Tokyo, Japan.

Thomas placed second in the 110m hurdles at the National Senior Championships (Trials) last month to book his ticket to Tokyo with a personal best 13.11 seconds. The result made him the fifth-fastest Jamaican of all time in the hurdles and gave him an early birthday present.

“Whenever I come down to compete in Jamaica, it’s always around about my birthday week, so I knew going in, this was the time to give myself an early birthday present and I was able to deliver for myself,” he said.

Born to Jamaican parents in the USA, Thomas turned 21 on June 29, two days after Trials

He has been coming to Jamaica to run since 2016 when he made the Carifta Games team. Two years later, he equalled the world under-20 record of 12.99s and then he won the gold medal at the 2018 World Athletics Under-20 Championships. His 2021 season started well with a NCAA Indoor 60m victory and an outdoor personal best of 13.22s, but slowed due to injuries which led to a subpar run at the NCAA Outdoor Championships in June.

“I just had to turn the next page and use it as mental fire going into Trials,” the departing Louisiana State University (LSU) senior said. “I knew what was at stake. I kinda knew the competition would be fierce and I knew I just had to buckle down, stay in my lane and just pull through, and trust God.

“It was one of those things where I was checking off the big goals I have set for myself from last year when they shut everything down from quarantine, and everybody had to stay in their rooms.

“I’ve made the Carifta team. I’ve made the World Junior team. The next step is the big thing, that being the Olympics, and it’s a great feeling.”

Though his LSU days are behind him now, Thomas has continued his Olympic preparations in those familiar surroundings at Baton Rouge.

Thomas and LSU head coach Dennis Shaver have targeted peak performance for exactly this part of the season.

Shaver’s advice will guide him.

“He told me not to put too much pressure on myself going into this, just to have fun with it, just listen to my body and I should be fine,” he said.