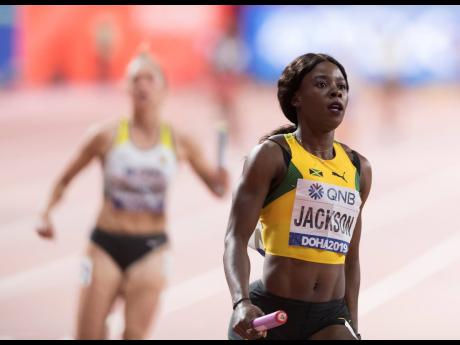 AT THE 2012 Olympic Games in London, the United States’ 4x100m women’s relay quartet of Tianna Madison, Allyson Felix, Bianca Knight and Carmelita Jeter wrote their names in the record books after clocking a world-record 40.82 seconds to win the...

AT THE 2012 Olympic Games in London, the United States’ 4x100m women’s relay quartet of Tianna Madison, Allyson Felix, Bianca Knight and Carmelita Jeter wrote their names in the record books after clocking a world-record 40.82 seconds to win the event, as Jamaica finished second in 41.41 seconds.

Four years earlier at the Beijing Olympics, Jamaica’s quartet with individual gold medallist Shelly-Ann Fraser-Pryce, and joint silver medallists Sherone Simpson and Kerron Stewart, and Veronica Campbell-Brown was expected to break the world record. However, after a brilliant start by Fraser-Pryce, a botched baton change between Simpson and Stewart resulted in the team failing to finish.

Once again, expectations are very high going to Tokyo as a world record is on the radar for the Jamaicans, once they get into the final scheduled for Friday, August 6, at 7:50 a.m. Jamaica time. Compared to the United States’ quartet, which broke the world record nine years ago when Jeter was the quickest with 10.78 seconds, this Jamaica team is far superior as Fraser-Pryce, 10.63, Elaine Thompson Herah, 10.71, Shericka Jackson, 10.77, and either Natasha Morrison, 10.87, or Briana Williams, 10.97 to choose from, looks frightening.

Once all things click in Tokyo, this team can go sub-40.7 seconds and put the world record out of reach.

However, for this to happen there are several factors that the coaching staff should be mindful of, foremost that synergy is at the forefront; and time will have to be found to ensure that enough practice is done, especially with our top three all doubling. This could be a disadvantage, as all three could be in competition six times before the preliminary round of the 4x100m relay, which begins at 8 p.m. on Thursday, August 5, Jamaica time. This is two days after the women’s 200m final, which could feature all three. Also, all top three Jamaicans are expected to feature in the 100m final.

It is unlikely that any of the three will run in the preliminary round of the relay event as after six combined rounds of 100 and 200m, they will definitely need a break. It will be interesting to see which quartet runs the early round. Maybe only one of the big three will be needed here, and as Morrison is very experienced in the relays, she is expected to be joined by Remona Burchell and Williams. The big question is, which of the big three will run?

This is where a Kemba Nelson – who was originally selected – would have played a crucial role, but having been taken out of the team to Tokyo, the coaching staff will have to search elsewhere. Quarter-miler Roneisha McGregor, who ran some solid times in the 200m this season, could be the answer.

Imagine this line-up in the final – Williams leading off to Thompson Herah on second leg, with Fraser-Pryce on the curve on third leg handing over to Jackson on anchor. The world record beckons, Jamaica.