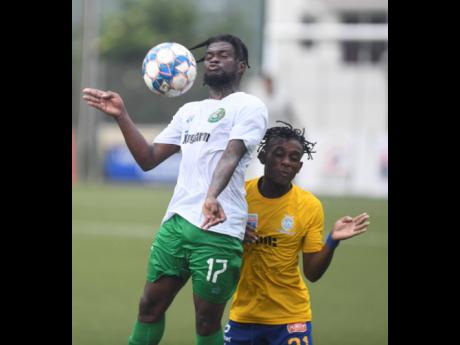 Donovan Duckie, head coach of Vere United, expressed surprise at his team’s outstanding early showing in this year’s Jamaica Premier League (JPL), this after they defeated Harbour View 3-2 to move to the top of the points standings. The game was played at the Captain Horace Burrell Centre of Excellence, University of the West Indies, Mona, yesterday.

“We have never thought about this,” Duckie told The Sunday Gleaner. “We were just three weeks into our preparations and I know personally of four of five teams in the league that were training for six months with good background, gym work for months, and I know we cannot compete with these teams unless we are thinking smart.

“What we did in our three weeks’ preparation was that we did sands, we did hills and we did a lot of cardiovascular work and core work and then we started doing some tactical work,” Duckie said. “We are getting some results and I am surprised by the results, because we never set out for this.”

Tyrese Harrison (sixth minute), Ricardo Dennis (52nd) and Romaine Plummer (78th) were the scorers for Vere United, who are now at the summit on 11 points.

Substitute Cristojaye Daley netted both goals in the 51st and 55th minutes for the previously unbeaten Harbour View, who are now third on eight points. Defending champions Portmore are second on nine points.

Vere United and Waterhouse are the only unbeaten teams remaining in the competition this season.

Ludlow Bernard, coach of Harbour, said he was surprised by their poor performance.

“It is a very indifferent performance and rather lacklustre,” said Bernard. “Strangely enough, that lacklustre start wasn’t what we bargained for and wasn’t what we trained for, and so it kind of baffles me as to why we got this start.”

Meanwhile, Dunbeholden, led by a brace from striker Kimoni Bailey in the 25th and 55th minutes, defeated Molynes United 3-1 in the second match of the double-header at the same venue. Rodave Murray netted the opening goal for Dunbeholden in the 20th minute. Captain Nicholas Nelson netted the consolation goal for Molynes United in the 68th minute.

The victory was Dunbeholden’s second of the season from five matches. Molynes United, who are winless this season, were suffering their third defeats in five matches.

Dunbeholden’s coach, Harold Thomas, said: “I think we did relatively well because we did some work in the week on the things we wanted to do and players expressed themselves and we are happy about this.”

Anthony Patrick, coach of Molynes United, said: “We started out flat and, when we kept giving away the ball so easily, it cost us a defeat,” he said.