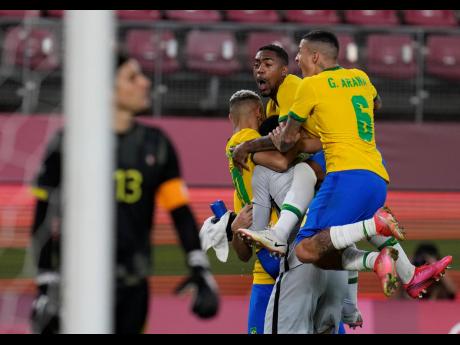 Defending champions Brazil will face Spain for the Olympic gold medal in men's football on Saturday.

Spain beat hosts Japan 1-0 yesterday with Marco Asensio scoring a curling shot in the 115th minute in Saitama. The 25-year-old Real Madrid winger is one of three players in the squad over the age of 24 permitted at the Olympics. Spain benefits from being able to secure the release of players from its top clubs for an additional tournament squeezed into the season.

This time, the Brazilians do not have Paris Saint-Germain forward Neymar, whose penalty clinched gold at the 2016 Olympics in Rio de Janeiro in a penalty shoot-out against Germany. But they still won a shootout in Kashima, beating Mexico 4-1 on penalties after a scoreless draw in the semi-final.

Mexico will play Japan for the bronze medal in Saitama on Friday. The gold-medal match is set for the following day in Yokohama.

"Spain is coming with its maximum force," Brazil coach Andre Jardine said. "They've formed a strong team over the course of the tournament."

Spain's only Olympic title came at home – at the 1992 Barcelona Games. The country's last final was at the 2000 Sydney Games, losing to Cameroon.

Brazil, who lost the Copa America final to Argentina last month, are through to a record fifth Olympic final. The 38-year-old defender Dani Alves leads an otherwise youthful squad.