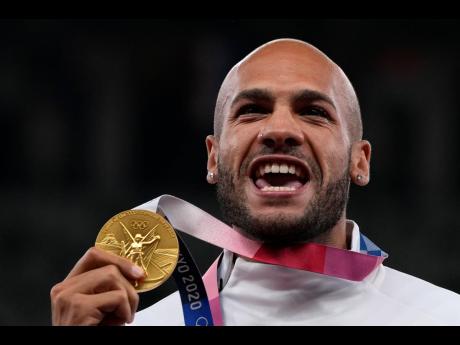 AP
Lamont Marcell Jacobs of Italy poses with his gold medal following the men’s 100-metre final at the 2020 Summer Olympics on Monday.

Usain Bolt has not yet reached out to congratulate the man who succeeded him as Olympic 100-metre champion.

“I know he received some messages from other Olympic champions welcoming him to the club, so to speak,” Paolo Camossi, the personal coach of the surprise gold medallist from Italy, Marcell Jacobs, told The Associated Press yesterday. “But not from Bolt.”

Not that it really matters.

That is because, to Jacobs, Bolt will always remain a legend and the face of track and field at the Games. Before retiring in 2017, Bolt won eight Olympic gold medals.

“Usain is Marcell’s idol. Marcell grew up watching all of Bolt’s races,” Camossi said. “He has them memorised.”

Jacobs said after winning the 100 in 9.80 seconds – 0.01 faster than Bolt ran at his last Games five years ago, but far slower than Bolt’s world record of 9.58 – that it is way too early to compare champions.

“Right now there’s nobody who can be compared to Bolt,” the coach said. “Marcell did something great, but this is the first Olympics of the post-Bolt era. The nice thing, though, was that he won with a great time. It was the fastest winning time at the Olympics – besides Bolt’s victories. That’s notable.”

There’s no doubt Bolt has been paying attention to the Olympics. After Jamaica’s sweep of the medals in the women’s 100, Bolt posted a video on Twitter and Instagram of himself dancing in celebration.

While Jacobs still plans to run the 4x100-metre relay in Tokyo – the heats start tomorrow – he and Camossi have already established their post-Olympic schedule.

After what should be a celebratory return to Rome on Monday, Jacobs will be back on the road a week later when he travels to the United States for a Diamond League meet in Eugene, Oregon, on August 21 for his first 100 metres as Olympic champion.

“We want to test the track for the World Championships,” Camossi said, referring to next year’s Worlds at Hayward Field. “We’ll have to see how his legs are holding up. But he can wear that gold medal around his neck for three years, and we’ve got to get accustomed to that.

“Before, he was someone who was just trying to upset the established hierarchy,” Camossi added. “Marcell is the man to beat now.”

Jacobs was initially a long jumper, but switched his attention to sprinting after a series of knee injuries.

Camossi was a jumper, too. He won the triple jump at the World Indoor championships in 2001 with a rare victory over then Olympic champion Jonathan Edwards of Britain.

Like his pupil, Camossi had to study up on sprinting techniques. And both are still learning. Jacobs had not run a sub-10 100 until this year, so the learning curve has been steep.

“He’s only really been a full-time sprinter since 2019. So there’s definitely room for improvement and a lot of aspects still to work on,” Camossi said. “And at this level, if you can improve something by one per cent it makes an incredible difference.”

And who knows, maybe if Jacobs does keep improving, Bolt will eventually notice.