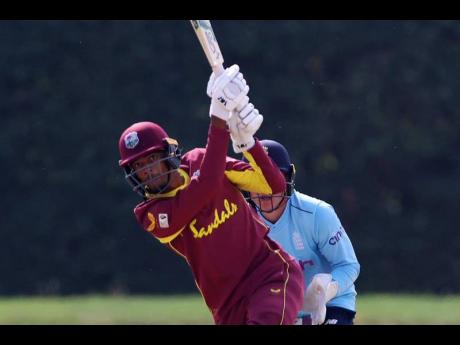 CWI photo
West Indies Under 19 batsman Teddy Bishop plays a shot during his innings of 97 runs against England Under 19 in the second Youth One-Day International cricket match at Kent County Ground yesterday.

The 18-year-old right-hander hit a glowing 97 off 104 balls to lift the Caribbean side to 180 all out in the 40th over and, despite an excellent effort to defend the modest total, they went down by a single wicket to fall behind 2-0 in the six-match series.

West Indies looked sure bets to win it when they reduced the hosts to 162 for nine in the 35th, but a 19-run, last-wicket stand between Fateh Singh (12 not out) and Nathan Barnwell (three not out) frustrated them and took England over the line off 38 overs.

Fast bowler Isai Thorne was again among the wickets, with three for 54, while left-arm spinner, Anderson Mahase, grabbed two for 34 as the Rising Stars struck at vital times during the run-chase.

Bishop had earlier taken centre stage after West Indies U19s chose to bat at Kent county ground, holding the innings together as wickets tumbled around him.

“It was really pleasing for me. The wicket was really good for batting, so I really tried to capitalise,” Bishop said afterwards.

“I thought the first 20 balls of my innings were really important in getting a start and then continuing at the back end.”

When opener Matthew Nandu retired hurt for four early on, the right-handed Bishop arrived to extend the first wicket stand with Anderson Amurdan (27) to 64.

Amurdan hit five fours off 37 deliveries before he was bowled by off-spinner Fateh in the 12th over, and captain Ackeem Auguste (six) added a further 22 runs for the second wicket with Bishop, before also going bowled by leg-spinner Tom Prest (3-36).

Auguste’s dismissal triggered a slide that saw five wickets tumble for 35 runs as West Indies U19s slipped to 121 for six in the 25th over, with Barbados-born England U19s captain and left-arm spinner, Jacob Bethell, snatching three for 29 in an incisive spell.

Bishop, who punched nine fours and two sixes, then propped up the innings in a critical 54-run, seventh wicket stand with Thorne, whose 11 consumed 38 deliveries.

In reply, the hosts got a top-score of 63 off 80 balls from number four James Rew, while Bethell and Rehan Ahmed struck 20 apiece, to be in control of the contest at 143 for four at the halfway stage.

Rew struck 10 fours and put on 53 for the third wicket with Bethell and a further 36 for the fourth with Rehan Ahmed.

Rew had added 28 for the fifth with George Thomas (13) before the innings suddenly fell apart as Thorne and Mahase grabbed crucial wickets – five going down for 19 runs.

However, Fateh and Barnwell remained composed and were helped by six wides during their partnership as the visitors lost their discipline, finishing with 26 wides overall.

The third match is carded for tomorrow at the same venue.