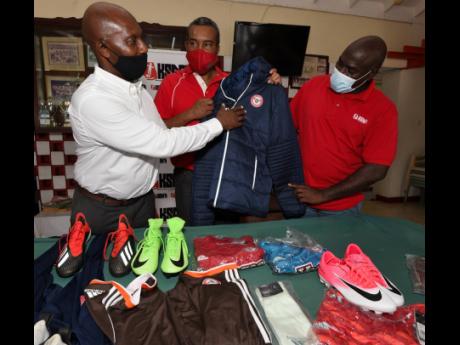 Rudi Page, from London-based Making Connections Work, who brokered the partnership between Brentford FC Community Football Trust and KSAFA, said the club was delighted at the partnership.

“I am pleased, and also it demonstrates that there is a commitment to support Jamaica from Brentford Football Club, which I think is great as well,” Page said.

“This opens up the way to build on relationships, and of course build more donations as well because we know that their needs are great.

“These gear are absolutely high quality and there are football boots that professional footballers would have used, and they are very expensive as well.”

President Wayne Shaw says KSAFA is grateful to Brentford for the donation because he believes it will be a confidence boost to the clubs.

“I am very elated because this is the beginning of more things to come,” Shaw said. “We have been meeting with them for the last nine months online and they have a lot of plans for KSAFA.

“It is not just donating goods, because they are going to be helping us out in the coaching area, management areas, and other technical areas in which they can assist us.

“It is really something that is lovely and it is only beneficial to KSAFA and our players.”

Barbican FC Director Christopher James has lauded KSAFA for its work despite the COVID-19 pandemic.

“It is a start and I like what I saw, and the plan is to get some bilateral agreement with the club because Jamaica, and in particular KSAFA, needs partnerships internationally. That is what Rudi brings to the table,” he said.

Brentford is the club of Reggae Boyz defender Ethan Pinnock, who featured for Jamaica in their 3-0 defeat to Panama in their FIFA World Cup Qualifier at the National Stadium on September 5.