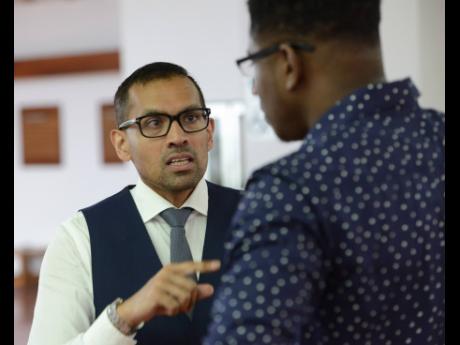 File
Sports attorney Dr Emir Crowne (left) with quarter-miler Ryker Hylton on arrival at the Jamaica Conference Centre in Kingston for his anti-doping hearing on Tuesday, May 30, 2017.

Sports lawyer Emir Crowne says he hopes that the Norman Manley Law School Sports Law Specialist Clinic evolves into one that welcomes athletes in need of legal aid. The seven-week clinic, which ended recently, had Crowne as its facilitator and was...

The seven-week clinic, which ended recently, had Crowne as its facilitator and was set up with the aim of introducing students to the fundamental legal principles relating to dispute resolution in sport.

However, with many Jamaican athletes finding difficulty to afford the fees associated with legal representation during hearings, whether of an anti-doping or other nature, Crowne said the clinic would be the ideal.

“Hopefully, the clinic continues,” he said. “Maybe it even grows into a full-time clinic, like a pro bono (where the service is provided for free) clinic for athletes throughout the region. That’s really where I want to see it go, where athletes can approach the clinic’s students for advice on certain matters. It would be very similar to what Sport Solution does at Western University for Canadian athletes. So I would like to see something like that.”

The course was focused on the practical side of sports law, where students were trained in dealing with arbitrations similar to those heard at the Court of Arbitration for Sport, in Switzerland. Topics discussed included Doping In Sport, Team Selection Disputes, Disciplinary Disputes, Dispute Resolution in Sport (Arbitration and Mediation), and Sport Arbitration, which was broken down into oral and written advocacy.

Crowne described the course as being interesting to deliver.

“I’m trying to be as practical as possible, not really too much of anything academic, to just get down to the cases and to the actual practice of sports law. It was a fun time,” he said.

His other aim for the clinic is to see it facilitate the growth of regional sports lawyers by its introduction of a Caribbean Sports Law Moot. A moot is a mock court hearing, usually intended as an appeal, where the participants analyse a problem, research the relevant law, prepare written submissions, and present oral argument. Moot problems are typically set in areas of law that are unsettled or that have been subject to recent developments. They usually involve two grounds of appeal, argued by each side.

“The first moot was this year, it went very well,” he said. “I’d like to see it grow into a more formalised moot where students from The UWI (University of the West Indies), and other law schools in the region take part. It could be an anti-doping case, a team selection case, a disciplinary case, a football case, but I’d like to see it grow into an annual moot, much like the CCJ (Caribbean Court of Justice) moot.”