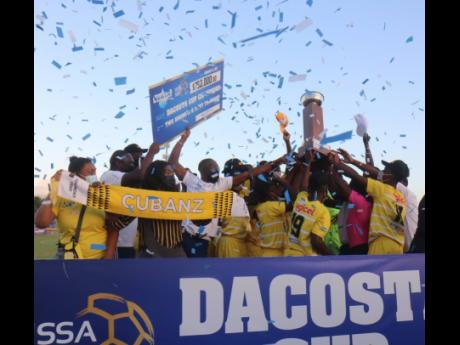 The star of the show for Garvey Maceo was former national under-17 player Gregory Cousins who scored a hat-trick. He opened the scoring in the 14th minute when he skipped by one defender to slot the ball home. He was again on the scoresheet in the 35th minute putting the ball past an onrushing Ashawni Campbell who was in goal for Manning’s. Garvey Maceo made it three on the stroke of half-time with Cousins’ strike partner Cleo Clarke driving at the defence line and firing a powerful shot brushing the fingertips of the goalkeeper who had a day to forget.

Cousins brought up his hat-trick in the tamest of fashions rolling the ball past a poorly positioned wall beating the goalkeeper who was in no-man’s land in the 73rd minute. The free kick was awarded after Manning’s went down to 10 men. Javin Williams was sent off after his second caution. Clarke netted his brace in the 85th minute.

Coach Merron Gordon said it felt very good to win trophies at all age levels with the same team.

“Cleo (Clarke) and (Gregory) Cousins are very good players who captained the under-14 and 16 teams, respectively. They are experienced players.”

He continued: “I think tactically we got it right. We got an early goal and pushed them back. I think because of the high line we knew we had good players who could play passes around them and it worked.”

Veteran coach of Manning’s, Everton Tomlinson, said it’s disappointing to see the occasion get the better of his players.

“Trust me, it’s really tough. I was expecting us to turn up and play our best game for the season. I don’t think we came out here today with the real heart and attitude to become champions. The players displayed a lot of nervousness and indiscipline,” Tomlinson said.

“I have to give them credit for working hard throughout the season. Even today, we had some moments but I think the occasion got the better of them the fact that most of them are 15 years old,” he added.