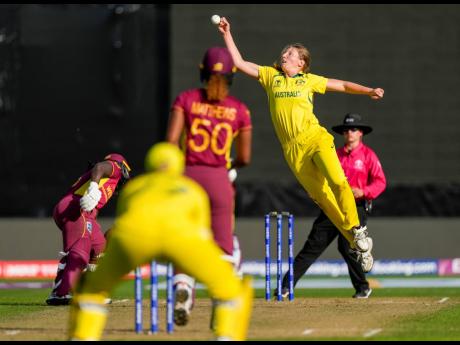 AP photo
Darcie Brown of Australia (second right) attempts to field off her own bowling to the West Indies' Hayley Matthews during the first semifinal match of the Women's Cricket World Cup in Wellington, New Zealand on Wednesday, March 30, 2022.

Alyssa Healy struck 126 from 107 balls and shared a 216-run opening partnership with Rachael Haynes as six-time champions Australia beat the West Indies by 157 runs Wednesday to reach the final of the Women’s Cricket World Cup.

Haynes made 85 as Australia posted 305-3, batting first in a match reduced to 45 overs per side.

The West Indies’ reply ended at 148-8 when captain Stafanie Taylor was out for 48 in the 37th over. Chinelle Henry and Anisa Mohammed were unable to bat because of injuries.

The start of play was delayed almost two hours by misty rain on a dank, foggy day in Wellington and the West Indies were gleeful to win the toss and to be able to bowl first. They expected a greenish pitch and low cloud ceiling at the Basin Reserve to assist their seamers in the important task of dismantling Australia’s top order.

There was some early assistance for the seam bowlers, or at least a difficult bounce, and Haynes and Healy were watchful, scoring 37 runs during the nine-over power play. Even Hayley Matthews was assisted with her off spin by the pitch, which provided grip and turn.

But as the cloud burnt off and the sun poked through, the Australian batters warmed to their task and the innings blossomed.

Healy took only 11 runs from her first 29 balls and was less assertive than Haynes at first. But she grew more and more commanding in the range of her shot play, in the use of her feet and her placement in the broad expanse at the Basin Reserve, the largest ground used in the tournament.

Healy posted her half century from 63 balls, then moved to another gear and reached her century — her fourth in one-day internationals and first at a World Cup — from 91 balls, adding her second 50 from only 28 deliveries.

There was no containing her. She was able to manufacture shots by influencing the length of the bowlers and in total struck 17 fours and a six.

Haynes played the perfect support role and their partnership occupied nearly 33 overs. Healy was first out, caught in the deep from the bowling of Shamilia Connell.

“I love batting with Rachael, she is a calming influence,” Healy said. “She just has a calm nature about her which helps you just keep it ticking over.

“Getting to the final is what we set out to do. We wanted to be at the Hagley Oval on the 3rd (for the final) and I thought everyone did an amazing job.”

Haynes was out soon after Healy and Ashleigh Gardner (12) in the same over. But captain Meg Lanning (26) and Beth Mooney (43) brought Australia home with an unbroken partnership of 69 for the fourth wicket.

Chasing such a large total confronted the West Indies with a sizeable dilemma. Their decision to bowl first had been informed partly by the weather, by the prospect rain might return. The weather held off.

Needing 306 from 270 balls, it could choose to rely on all-out attack from its best batters or a more managed chase over 45 overs.

Its best batters, Deandra Dottin and Hayley Matthews, were crucial to the run chase but both were out for 34 and Taylor’s was the only other significant contribution.

“I’ve been involved in some very stressful semifinals in the past and we came in expecting a difficult game,” Lanning said. “Healy and Haynes set it up for us.

“There were some difficult moments there. The West Indies bowled really well up front and put us under pressure. But it was a really good game plan we had to really take that pressure on and build a good base.

“It wasn’t as easy as what it looked. It was a good result but we had to work hard for it.”