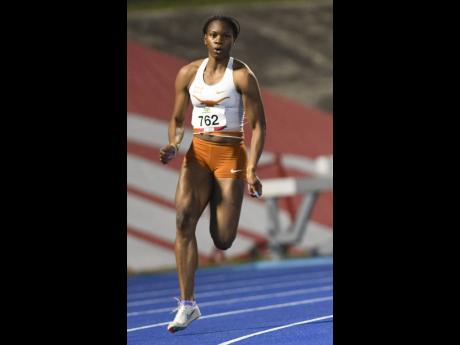 Former national junior star Kevona Davis was in scintillating form at the Big12 championships in Lubbock, Texas, last weekend after she recorded personal best times in both the 100 and 200 metres.

Davis, a former Edwin Allen High School student, became the third Jamaican woman this year to clock under 11.00 seconds for the 100m after she ran a personal best of 10.95 seconds in the first round of the women’s event last Saturday. Only Shelly-Ann Fraser-Pryce’s world-leading 10.67 and Elaine Thompson Herah with a season’s best 10.89 are faster than Davis this season.

The University of Texas Davis ran a wind-aided 10.83 (2.4m/s) for second in the final. Her teammate Julien Alfred, a former St Catherine High student, won in 10.80. Alfred is a native of St Lucia.

The 20-year-old Davis was also second in the 200m in a personal best of 22.26 seconds, lowering the 22.49 she set in the preliminary round on Saturday.

Meanwhile, Kemba Nelson of the University of Oregon captured the women’s sprint double at the PAC 12 Outdoors track and field Championships at Hayward Field in Eugene on Sunday.

Nelson was also part of the University of Oregon 4x100m relay team that won in 42.91 seconds.