Eskrik-Parkinson happy to finally represent Jamaica as a diver 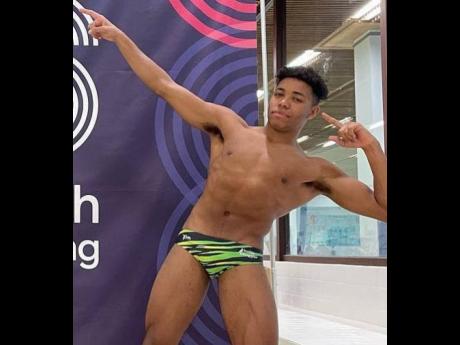 CANADA-BORN DIVER Yohan Eskrik-Parkinson said he was happy to make his debut for Jamaica at the recently concluded Canada Grand Cup in Calgary, Canada, but he still has a lot to learn if he is going to achieve his goals. “I was honoured to finally...

CANADA-BORN DIVER Yohan Eskrik-Parkinson said he was happy to make his debut for Jamaica at the recently concluded Canada Grand Cup in Calgary, Canada, but he still has a lot to learn if he is going to achieve his goals.

“I was honoured to finally be able to represent Jamaica,” he said.

“It has been a very long process to get here, particularly getting my passport, which was delayed due to the pandemic.”

Eskrik-Parkinson was unable to make it past the semi-finals at the competition where his countryman and mentor Yona Knight-Wisdom claimed the silver medal.

“Overall, my score was not quite what I’d hoped,” he said.

“However, between this being my first international meet, and having recently completed an enduring competitive season in the NCAA, I was not expecting to perform at my best.”

He said overall he enjoyed the experience, which also presented him with the opportunity to continue training for the synchronised event with Knight-Wisdom.

The 21-year-old said he has big plans for the future of his career as a diver, with Knight-Wisdom as one of his guides.

“I will be moving to Scotland around September to train and compete with Yona for the Olympics,” he said.

“Although I am en route to attending graduate school, I am taking two gap years to pursue diving. When I arrive, we will be training together full time.”

The young diver, who also recently completed his Bachelor of Arts degree in neuroscience was also hoping to compete at the World Championships this year, but that has had to be postponed.

“In the future, attending these events throughout the year to adjust to competing on the international stage will be one of the most important aspects of my preparation for the Olympics. Although there is a lot to learn, I believe the most important will be preparing myself mentally to compete at that level.”

According to Eskrik-Parkinson, the setback has not dampened his spirit or his eagerness to excel as a Jamaican diver.

“As the first Jamaican synchronised diving team, I hope to bring Jamaica success in an area where it has never competed,” he said.

“As an individual, I would hope to (reach the) finals at various large international events during my career. I hope to be an ambassador of the sport in Jamaica, and possibly bring the sport to young athletes in Jamaica.”