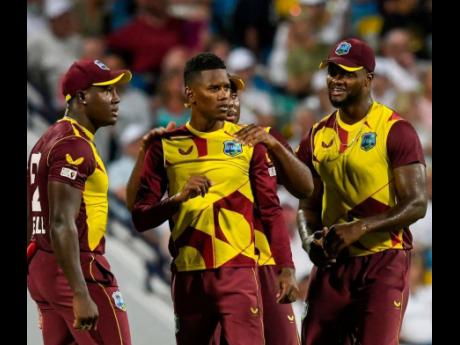 Sent in following a one and three-quarters of an hour delayed start, Bangladesh reached 105 for eight from 13 overs before the last of two rain breaks ended the contest late in the day.

While the sun returned soon afterwards, the cut-off time of 5:18 p.m. (Eastern Caribbean time) for a five-over run chase had passed, forcing match officials to take the eventual decision.

Improved weather has been forecast for Sunday’s second T20 International, although brief morning showers are expected.

“I’m disappointed for the fans because obviously the crowd was such a nice crowd and were waiting for the game to go on,” said West Indies head coach Phil Simmons.

“I know the rain kept some people away but hopefully there is no rain tomorrow and we can have a full house.”

Wet spots on the bowlers’ run-ups negated any chance of a scheduled 1:30 p.m. start but once play got underway at 3:10 p.m., West Indies quickly took control of the 16-over per side affair as fast bowler Romario Shepherd (3-21) and leg-spinner Hayden Walsh Jr (2-24) struck telling blows.

Left-arm spinner Akeal Hosein got Munim Shahriar (2) to edge the third ball of the innings to wicketkeeper Devon Thomas before Shakib Al Hasan, who top-scored with a cameo 29 from 15 balls, added 34 for the second wicket with Anamul Haque (16).

Shakib and Anamul took boundaries off the next over from Shepherd before Shakib got stuck into Hosein, clearing the ropes at long on and finding the square boundary in the third over.

However, left-arm seamer Obed McCoy broke the stand with only his third delivery when he hit Anamul in front with a full length ball and thereafter, Bangladesh never regained momentum.

Litton Das (9) put on 20 for the third wicket with Shakib before tugging a pull to captain Nicholas Pooran at short midwicket in the seventh over and with four runs added in the next over, Walsh struck twice to heap further pressure on the visitors.

First, he got Shakib to slash at a wide ball and edge behind after the veteran had crunched two fours and two sixes and three balls later, Afif Hossain holed out to Brandon King in the deep without scoring.

Struggling on 60 for five, rain forced a 35-minute break and with the game further reduced to 14 overs on resumption, Bangladesh’s fortunes only continued to decline.

Captain Mahmudullah sliced Shepherd low to Walsh at point in the 11th over to depart for eight and Mahedi Hasan (1) perished in the same over when he feathered a catch behind.

Wicketkeeper Nurul Hasan counter-attacked, lashing a four and a brace of sixes in a 16-ball 25, putting on 26 for the eighth wicket with Nasum Ahmed (seven not out).

Nurul’s demise in the 13th over, swatting a wide ball from fast bowler Odean Smith into the deep, ended Bangladesh’s resistance and also signalled the final rain break.