Binnie not ready to call it quits just yet, eyes 2026 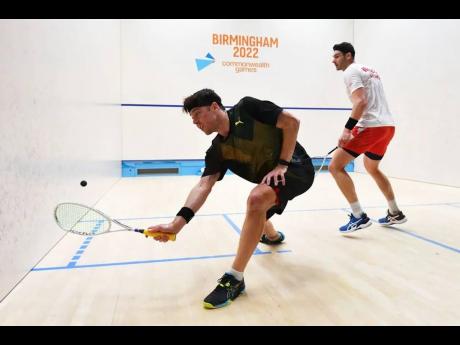 Courtesy of birmingham2022.com
Christopher Binnie of Team Jamaica plays a shot during a men’s singles Round of 16 match against Adrian Waller of Team England on day three of the Birmingham 2022 Commonwealth Games at University of Birmingham Hockey & Squash Centre on Sunday.

JAMAICA’S CHRISTOPHER Binnie, the 33-year-old former top 100 squash player, was eliminated from this year’s singles in Sunday’s Round of 32, but insists that he is ready to answer the call if he is able and selected again for Australia. Binnie, who...

JAMAICA’S CHRISTOPHER Binnie, the 33-year-old former top 100 squash player, was eliminated from this year’s singles in Sunday’s Round of 32, but insists that he is ready to answer the call if he is able and selected again for Australia.

Binnie, who has won a host of tournaments around the world during his career, equalled his career best by reaching the Round of 16 before being beaten by England’s former world top 20 player Adrian Waller on Sunday.

He had already defeated Ghana’s Evans Ayih in the opening round before gaining a bye over India’s Ramit Tandon in the Round of 32.

Kingston-born Binnie, who currently resides in America, reflected on his fourth Games:

“I equalled what I did at the last Commonwealth Games, and although I got a bye in the previous round, you have to take the fortune that comes your way.

“I was happy that I made it here, not injured and was able to compete.

“Four years is a long time - a lot can happen - and we have a lot of young guys coming up, so I might not be able to qualify for a singles spot, but I wouldn’t be opposed to playing, even if just as a doubles partner.

“If Jamaica needs me, I’m here.

“They have done a lot for me, so I’ve no intention of riding off into the sunset.

“I wouldn’t say no if I got the call in four years’ time.”

Looking back on a career highlighted by being runner-up at the Pan American Games, Binnie modestly continued:

“I’ve done pretty well over the years and been lucky to win a bunch of titles in Jamaica and the Caribbean, while representing Jamaica.

“In 2006, I was 16 years old when I made my Commonwealth Games debut in Melbourne, and having never played outside the Caribbean too much at the time, I wasn’t aware of what the level was outside.

“In 2010 I was at college in the US, and I’m still based in the northeast - in Connecticut - where my coach and most of my team are.

“This Games was a big goal for me pre-COVID, but not being able to play during that time, it’s taken a while to get back into things.

“I was full-time on ‘the tour’, until COVID hit and the tour went down, so I had to get a job (in finance).

“I train as much as I can, but have to balance what I do now.

“Over the years I’ve won a few and I’ve lost a few.

Binnie has slipped outside the top 100 and now stands at 119. Looking back on his Games exit to multiple former British junior title holder Waller, he concluded:

“Adrian was very sharp, and there wasn’t much more that I could do.”

“He has been inside the world top 20 and is still ranked pretty high, whereas my ranking is now quite low.”

Julian Morrison, defeated in the opening round by Pakistan’s Nazir Iqbal, continued to bounce back, adding a 5-11, 11-5, 11-8, 11-5 (3-1) victory over British Virgin Islands’ Joe Chapman to his Round of 16 in the Plate success against Ayih.

Morrison partners Binnie when the doubles competition gets under way today.