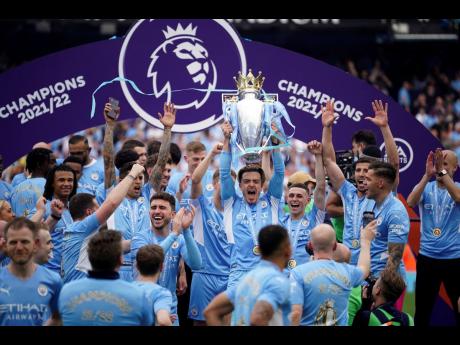 AP
Manchester City players celebrate with trophy after winning the 2022 English Premier League title at the Etihad Stadium in Manchester, England, on May 22, 2022.

WITH THE first match of the Premier League between Arsenal and Crystal Palace set to kick off today, regional rights holder VertiCast Media Group (VertiCast) says its CSport channels on cable and its website csport.tv are up and running, ready to provide uninterrupted live football content to thousands of excited fans across the Caribbean.

In addition to its CSport cable channels, which went live on more than 40 cable platforms across the region on August 1, the company said its live-streaming website, csport.tv, went live yesterday and would give fans access to all 380 games of this season’s Premier League, plus action from the NFL, FIFA World Cup Qatar 2022, and UEFA European national football.

According to Paty, regional fans will enjoy a free trial period on csport.tv streaming site until August 31, 2022.

“Friday’s opening-day fixture between Arsenal and Crystal Palace is expected to be the perfect matchup to start the season, and I know that the fans in the region are excited for this,” Paty said.

To gain access to csport.tv and take advantage of the free trial offer, fans are invited to create an account and choose from the channels and game listings on the site. The site is not yet compatible with iPhones.