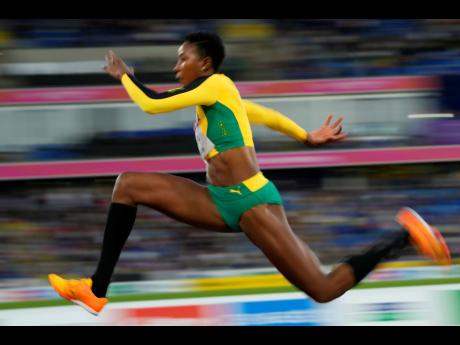 AP photo
Shanieka Ricketts of Jamaica makes an attempt in the Women’s triple jump final during the athletics competition in the Alexander Stadium at the Commonwealth Games in Birmingham, England, yesterday 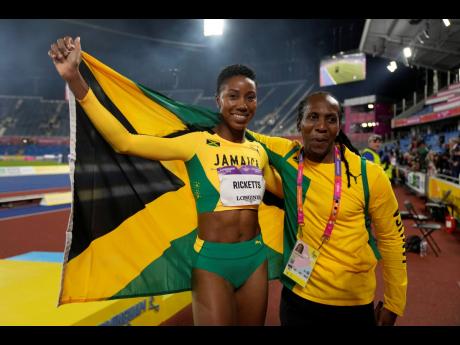 AP photo
Shanieka Ricketts of Jamaica celebrates after winning the gold medal in the women’s triple jump final during the athletics competition in the Alexander Stadium at the Commonwealth Games in Birmingham, England yesterday.
1
2

SHANIEKA RICKETTS cited dedication and her close support crew as she finally turned silver into gold by claiming the triple jump crown with a new Commonwealth Games record yesterday.

On a cold Birmingham night, not conducive to quality athletic performances, Ricketts smashed the existing Games record with a season’s best opening leap of 14.94 – just four centimetres shy of her furthest ever jump – to finally become the blushing bride after a career often spent being bridesmaid.

She has twice won silver at World Championships and also finished second to fellow Jamaican Kimberly Williams at the Gold Coast Commonwealths four years ago, yet no one could get near her yesterday, as she swept to a glorious victory.

Wrapped in the Jamaican flag, she spent more than half an hour accepting the adulation of a near 30,00 capacity crowd at the Alexander Stadium, posing for spectators as well as photographers, before saying:

“When you put in all the hard work it makes it so special to finally get on to the top of the podium.

“One of the biggest things is my support system and my husband and I have been students of the sport and we work very hard.

“I have basically no social life – it is all track and field – and putting in all this work over the years has helped me become consistent and it paid off tonight.”

Ricketts all but clinched the gold medal with her enormous opening leap – further than any of the night’s other 12 competitors had ever achieved.

“It’s very cold tonight, so I knew the conditions weren’t that good for the best jumps.

“I felt it (my first jump) was well over the 14-metre line and was so happy to see it was a Games record when the result came up.

“I was second four years ago, so to come out and win tonight makes me so happy.

“We have three jumpers here in the final and I was hoping for better results from the other two but I’m grateful to be able to finish on top of the podium for Jamaica.”

Dominica’s Thea Lafond came closest to Ricketts with 14.39m, while Williams, gold medallist in both 2014 and 2018, could only manage 14.25m, so was edged into fourth place by home favourite Naomi Metzger’s lifetime best leap of 14.37m.

Jamaica’s other finalist, Ackelia Smith, finished sixth on 13.83, having already had to qualify for the long jump final that morning.