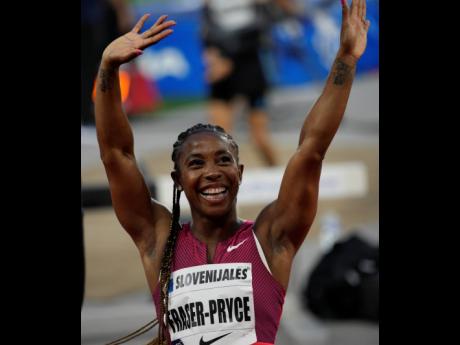 Reigning World 100-metre champion Shelly-Ann Fraser-Pryce initially had no words to express how she felt about her performance at the Monaco Diamond League meeting yesterday.

“I don’t have the words yet to describe how I’m feeling. #Godisgood,” she tweeted after producing a scintillating 10.62 seconds to boast the top six times over the distance this season.

The 35-year-old Fraser-Pryce blew from the blocks and stepped away from her compatriot Shericka Jackson to win the event in the new world lead.

Jackson, who is the reigning world 200-metre champion, was second in a new personal best time of 10.71.

Marie Josée Ta Lou of the Ivory Coast finished third in a lifetime best and African record of 10.72.

A little later, having digested the feat, Fraser-Pryce, on Instagram, comically posted, “Make room for the things you’ve prayed for … Yesterday’s Pryce is not today’s Pryce!”

But in a more serious setting, when asked about the race, Fraser Pryce sounded grateful.

“It’s remarkable. It is very hard to keep the speed on this high level. I’m in my late 30, and I think I feel like I have more to give. I look forward to doing my personal best (10.60) for the rest of the season.”

A few minutes before Fraser-Pryce’s speed was on show, Rushell Clayton clocked a lifetime best on her way to winning the women’s 400-metre hurdles.

Clayton, who finished fourth in the event at the just-concluded Commonwealth Games, won the race in 53.33 seconds, erasing her previous best time of 53.63.

She defeated her compatriot and reigning Commonwealth Games champion Janieve Russell, who was second in a season’s best time of 53.52, while Gianna Woodruff of Panama was third in 54.13.

Natoya Goule was also in winning form in the women’s 800 metres.

Goule, who finished fourth in the women’s 800 metres at the recent Commonwealth Games, won the event in one minute 56.98 seconds, her quickest this season.

In the 400 metres, World Championships’ finalist Jamaica’s Candice McLeod, finished second in a season’s best 49.87 seconds. Shaunae Miller-Uibo from The Bahamas won the event in 49.28, with Sada Williams of Barbados, third in 50.10.

Jamaica’s other competitors in the event Stephenie Ann McPherson, who did 50.52 seconds and Junelle Bromfield, with her fastest time of the year (50.93), were fourth and sixth respectively.

Ricketts, a silver medallist in the event at this year’s World Championships and a Commonwealth Champion from just a few days ago, continued to show exceptional consistency, leaping to 14.91 metres on her first attempt.

The event was, however, won by reigning World Championships’ winner Yulimar Rojas, who leapt to 15.01 metres on her fifth attempt to secure the victory as Tori Franklin of the United States of America (USA) finished third with a mark of 14.86.

Olympic champion Hansle Parchment had to settle for third in the men’s 110 metres hurdles.

Parchment, who pulled out of the Commonwealth Games final last week as a precautionary measure, got his usual slow start but still ran a season’s best 13.08 seconds.

The race was won by World Champion Grant Holloway of the United States of America (USA) in a season’s best 12.99 seconds, while second went to his compatriot Trey Cunningham in 13.03.