Oneka Wilson off to Clemson 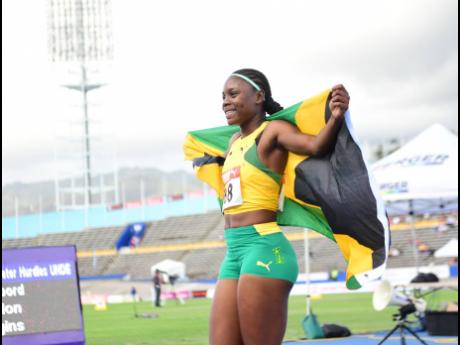 HYDEL HIGH School hurdler Oneka Wilson will be taking her talent to Clemson University for the upcoming school year.

At Clemson, the 19-year-old standout will team up with Jamaican Lennox Graham. Wilson’s last outing over the 100-metre hurdles came at the Flying Angels International Classic, where she finished second to the impressive Kerrica Hill.

Before that, Wilson was at the Carifta Games, where she was again second behind Hill, clocking 13.67 seconds. But at the ISSA GraceKennedy Boys and Girls’ Athletics Championships, Wilson was in fine form, breaking the Class One 100m hurdles record in a personal best, 13.00 seconds.

Wilson was injured and failed to secure a spot on Jamaica’s team to the just-concluded World Under-20 Championships in Cali, Colombia.

Corey Bennett, coach of Hydel, who has guided Wilson’s career for five years, said Graham is an excellent coach and, therefore, he fully endorsed Wilson’s move to Clemson University.

“I think that Lennox Graham is a very good hurdles coach and someone who would have served Jamaica well over the last five years.

“I have seen him doing well with Danielle Williams and one of our own, Trishawna Dennis, formerly of Hydel, and, yes, she wants to go, and I think that she will do very well there,” he said.

Bennett pointed out that Wilson is a very hard worker, and once she goes to Clemson and applies herself in the right way, he expects her to do well.

That hard work, Bennett explained, has much to do with how well she has been doing recently.

“She works very hard in training, and, in fact, Oneka never got a medal at Champs until first-year Class One, and she has been here from Class Four,” he said.

“She has worked her way up because she has always been in the shadow of others, but she was able to win back-to-back titles and she also broke the record in her final year in Class One,” Bennett said.

Wilson made the final 100m hurdles at the World Under-20 last year in Nairobi, Kenya, but could not take her place after testing positive for COVID-19.