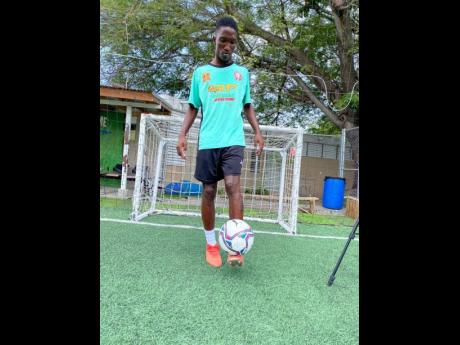 MORE THAN 60,000 people follow John Manradge on TikTok because of his freestyle football skills, but the 19-year-old wants to move from behind the screen and on to a stage, hoping that his calls for the resumption of local freestyle competitions...

MORE THAN 60,000 people follow John Manradge on TikTok because of his freestyle football skills, but the 19-year-old wants to move from behind the screen and on to a stage, hoping that his calls for the resumption of local freestyle competitions will be heard.

“I live in a poor community, and I believe that football has the ability to pull people and pull me into a hopeful escape from the real world. Rather than dealing with the struggles of life day to day, I am able to engage in football in a way that shuts out everything else,” he said.

“I would love to see the changes made to freestyle football competitions in Jamaica because I believe that it will allow kids to take their passion for this sport to the next level by giving them a chance to prove it. And I know that kids and adults can live a healthy lifestyle through freestyle football.”

The former Happy Grove High School player said such a competition would form a creative space for youngsters to benefit widely.

“A freestyle competition would pave a different path for players of all age groups. Freestyle football is like a learning programme designed to give all kids the freedom to think for themselves, make decisions and create moves. Football freestyle competitions can give younger kids a chance to interact with other people, meet new friends, travel, and make a living out of football,” Manradge said.

“I would like to play football at a professional level in America or even in Jamaica to help younger athletes financially and mentally; to give younger kids from Jamaica hope and inspire them to work hard and keep chasing their dreams,” he said.

“But before pro football, I would like to compete in the Red Bull Street Style competition to show that any and everyone can do it, whether you’re struggling financially or mentally (because) it all adds up to hard work, consistency, discipline, and the most important one is self-belief.”

He said if he makes it ‘big time’, he hopes he can be a positive role model for youngsters to look up to.

“I look up to Shamar Nicholson because he is one of the best footballers there is from Jamaica, and he motivates me a lot from the background he is coming from. Shamar Nicholson could have taken a different path when everything got difficult, (but) it was at that time that Shamar Nicholson took good use of the sport, not just to heal, but to make a better life for himself,” he said.

Until he is as successful as Nicholson, Manradge said he will continue to make freestyle football videos on social media.

“It has benefited me financially so far, and it gives me an endless flow of creativity, sense of peace and freedom,” he said.

Manradge also has more than 50,000 followers on Instagram and has, already, surpassed two million views.