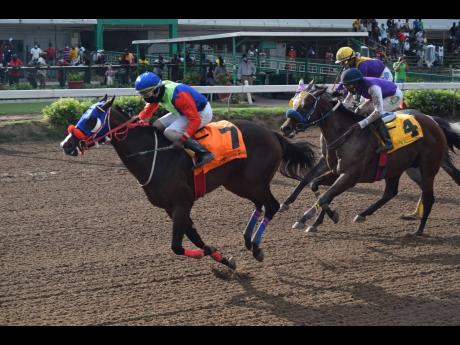 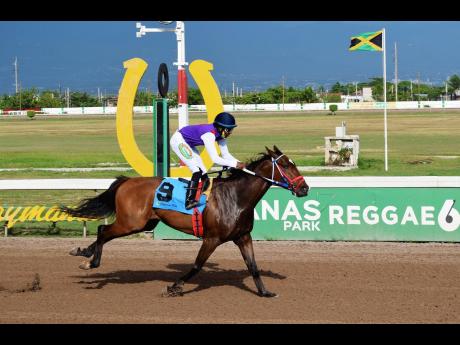 IAN PARSARD stablemates, imported JORDON REIGN’S and last year’s classic-winning filly, SHE’S A WONDER, are down to meet in Saturday’s Reggae Trophy at five furlongs straight, with two pounds separating her from the gelding.

JORDON REIGN’S is on a hat-trick, twice getting the better of in-form LURE OF LUCY. Hot favourite SHE’S A WONDER was among his victims on June 18, weakening into fifth at six and a half furlongs, as the American scored a 7-1 upset victory after being slowly into stride and tailed off entering the straight.

A much sharper JORDON REIGN’S returned July 16 to easily put away LURE OF LUCY for the second consecutive race, stalking and taking charge early off the turn to clock 1:12.3 at six furlongs in an open allowance/graded stakes event.

SHE’S A WONDER rebounded from defeat to easily beat the lower class, overnight allowance, on July 30, using her big pace to settle and run away from United States-bred THE GOOD WITCH at seven and a half furlongs.

Beating THE GOOD WITCH at seven and a half was routine work for SHE’S A WONDER. THE GOOD WITCH was out for the fifth time locally after three average efforts among overnight-allowance company, finishing four lengths clear of third-place claimer, AZARIA, when outclassed by SHE’S MY DESTINY in her previous race.

Though SHE’S MY DESTINY is a formidable foe on her best day, save her first victory after last year’s classics, she has shown a glass chin when asked to sprint against quality company, worsened by a habit of being slowly into stride.

Though she was reporting off a six-month lay-up with topweight, SHE’S A WONDER didn’t fancy the company when eyeballed by LURE OF LUCY on June 18, blinking first in the war on the lead, which a tailed-off JORDON REIGN’S stormed home to clean up.

Sitting two pounds off JORDON REIGN’S at five furlongs straight, SHE’S A WONDER will have to be at her sharpest to stave off the gelding, who has twice clocked 58.3 at the distance, his only loss at the trip being a fourth-place finish behind NUCLEAR NOON in which he bled.