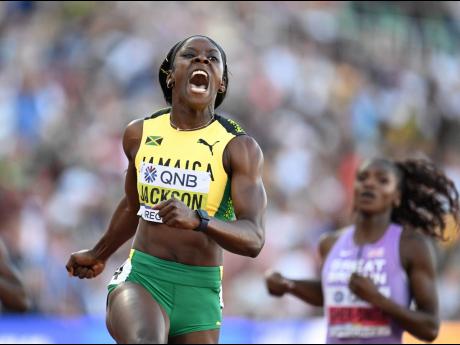 Gladstone Taylor
World 200 metres Champion, Jamaica’s Shericka Jackson, celebrates her victory in the final of the event in Eugene, Oregon on Thursday, July 21.

Jackson, with a personal best of 10.71 seconds done recently in Monaco when finishing second in the 100 metres behind countrywoman Shelly-Ann Fraser-Pryce, will only contest the short sprint and looks set to break the championships record of 10.96, set by the United States’ Janna Prandini in 2018 in Toronto.

Other women who are expected to figure well for Jamaica include Megan Tapper in the 100m hurdles and Janieve Russell in the 400m hurdles. Both failed to make it to the finals in Eugene, and while Tapper may still be looking for some sort of redemption from the season, Russell has since won the Commonwealth Games title.

After missing out on the Commonwealth Games, Adelle Tracey will return after her debut at the World Championships for Jamaica, competing in the 800 metres.

After an encouraging result in the men’s 400 metres where for the second year in a row he reached the finals of the one-lap event at the global level, Taylor will be hoping for another good performance.

National 200 metres champion, Andrew Hudson, after not being eligible to represent the country in Eugene, and who was not selected for the Commonwealth Games, will make his debut for the country in the half-lap event. Tajay Gayle, who is still recovering from injury, will contest the long jump, while sprinter Ackeem Blake is down to take part over 100 metres.

The country will be hoping to improve the medal haul of 22 it grabbed in Toronto at the last championships where seven gold, 10 silver and five bronze left them second on the medal table behind the United States, who grabbed 61.