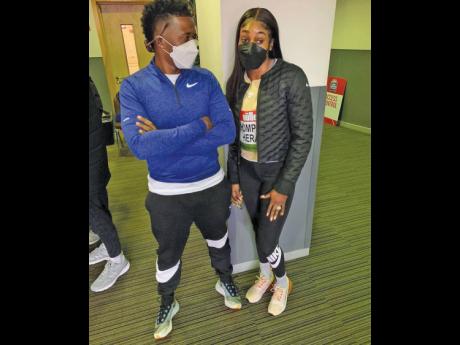 Devon Herah (left) with his charge and wife Elaine Thompson-Herah. 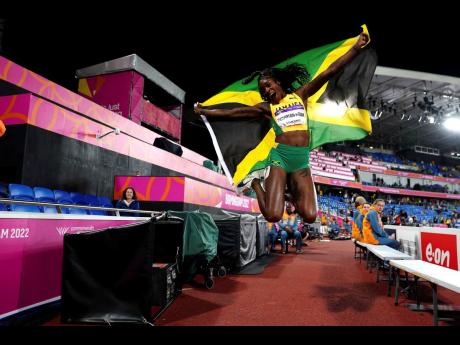 DERRON HERAH has been getting a lot of attention lately for his role as coach of Elaine Thompson Herah, his wife and fastest woman alive. In 2021, the husband-and-wife duo set up the New Era Track Club after Thompson Herah announced her departure...

DERRON HERAH has been getting a lot of attention lately for his role as coach of Elaine Thompson Herah, his wife and fastest woman alive.

In 2021, the husband-and-wife duo set up the New Era Track Club after Thompson Herah announced her departure from the MVP Track Club shortly after the Olympic Games, where, for the second time in a row, she was double sprint champion.

Many have questioned the move, but Herah said working with his wife in athletics is nothing new.

“Both of us are well familiar with the requirements of track and field or any sport for that matter. We have been together for almost 10 years and we have always been together, so it is pretty much natural,” Herah told The Sunday Gleaner.

He said for this reason, there is no problem separating work from personal life.

“If it is that we’re on the track or we’re at a track meet, I just view her as my athlete even though she is my wife,” Thompson Herah’s husband and coach said. “She is well focused. We even drive different cars to training and we are coming from the same place. Somebody else might look at it and think that we are having some kind of problem, no, that is not the case. Maybe to the outside, somebody will say ‘it is not good for a husband to coach a wife’ or vice versa, but we have been doing it so long that it is separated naturally.”

According to Herah, the difference between the two relationships makes it easier to handle the demands of either at any given time.

“If she is not giving the effort that I expect, then it will be the same thing as just another athlete and she deals with it as if it was just another coach, not in a disrespectful way, but the same way,” Herah said.

With the change of environment, he said he believes his wife is under better care.

“I do everything to try to minimise what she has to do, even on the husband’s side. I expect her to be well rested, her nutrition needs to be up and so forth,” he said. “I think it works a bit better. In the other circumstances, believe it or not, it is very stressful when the compassion and the care is not necessarily there. They are seen more like a racehorse or some type of cash cow. The need of the athlete is better met by someone who has a different type of love and compassion. And then when it comes on to the track, because I know when she doesn’t perform up to her expectations then she is definitely not happy with it, so I try to do everything to ensure that she is happy at the end of each competition.”

New lessons have also come with this new role as head coach at the New Era Track Club for Herah.

“Elaine is such a special athlete that anybody would learn. A lot of time she is out there performing and you don’t even see how because she is a person that was unable to train for a length of time, unable to do certain work that is necessary to get certain performance and then she goes out and puts down performances that are worldwide credible.”

He said the aim of the New Era Track Club was to give his wife that special attention so that she may achieve her special goals.

“The short-term goal (for the club) is to ensure that all of her goals are reached and realised, and her dreams come true.”

With her husband as her track coach, Thompson Herah’s major championships achievements include a World Championships 100 metres bronze medal and gold medals in the 100 metres and 200 metres at the Commonwealth Games, both in 2022.