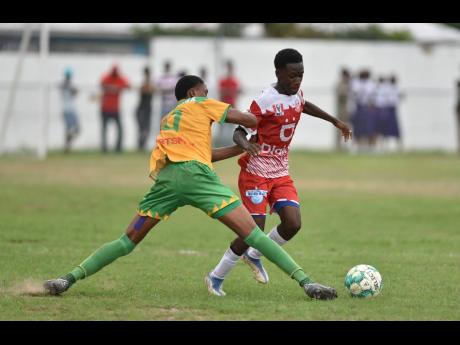 A tense battle between Campion College and Excelsior High, the top two teams in Group F of the urban ISSA/Digicel Manning Cup, ended without a winner yesterday as rain and lightning in the Liguanea area forced the game to be called off.

With both teams locked at 0-0 well into the second half and heavy rain and flashes of lightning leading to deteriorating conditions, the match officials took both teams off the field after 73 minutes. Conditions failed to improve and the game was abandoned.

Heading into the encounter, Excelsior were on top of the group with 10 points while Campion College were in second place with eight points hoping to take advantage of their home field. Both teams were unbeaten after four games, with Excelsior having won three of their four matches while Campion had two wins, both of them coming in back-to-back games.

In a game where the teams took some time to settle, Excelsior put Campion under pressure in the first half as the home side were uncomfortable with their high press. Although Excelsior managed to get themselves into good positions, they could not make things uncomfortable for Campion goalkeeper Alex James.

Campion had similar difficulties and, while Bryan Mayhew managed to get a shot on target, Excelsior goalkeeper Michael Clarke was equal to the task.

The second half was more of the same. Excelsior had the greater part of the possession and were winning their duels, but they failed to produce any clear-cut chances. That became even more difficult as the heavens opened. With lightning flashing in the area combined with the heavy rain, the match was stopped and eventually called off.

The fixture was a part of six games rescheduled from Tuesday because of the severe weather conditions caused by Hurricane Ian, which led to the postponement of matches last Saturday and Monday.