B.B. Coke aiming for strong finish to first round 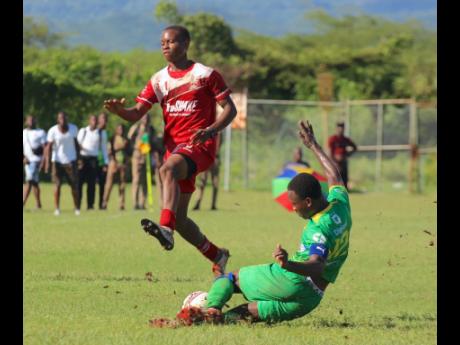 B.B. Coke High School, the 2019 Ben Francis Cup champions, are aiming to get maximum points from their remaining ISSA/Digicel daCosta Cup first-round games and will seek a successful start today when they host Sydney Pagon STEM Academy in a Zone E clash.

The Junction-based school was hit by injuries last year after a brilliant start to their season. This saw them fail to advance from the first round.

This season, after six games, they have found themselves in fourth in the six-team zone with a mere seven points. As they look to close out the round strong, they will not have to face zone leaders St Elizabeth Technical High School (STETHS). B.B. Coke lost by 1-0 margins in two games against STETHS this season.

While playing the team at the foot of the standings at home is something teams would relish, B.B. Coke have to wary. Sydney Pagon will be coming into the contest with newfound confidence after travelling to the cool hills of Malvern and edging former champions Munro College 2-1 to pick up their first points of the campaign.

Kemar Ricketts, coach of B.B. Coke, said he is looking for efficiency and consistency from his boys playing at home.

“We have played well in all the games that we lost because they were all 1-0 defeats. Last Saturday, for example, playing away to STETHS in conditions that weren’t conducive to the type of football we play, we were competitive and barring a few defensive mistakes things could have been different,” Ricketts said.

“The team is a good mixture of experienced and young players and we just need to get some consistency because we have been playing well all season,” he added.

Ricketts was reminded of how the entire town of Junction was in a frenzy when they won the Ben Francis KO Cup in 2019 and he is again banking on the 12th man and familiar conditions to get maximum points from their remaining four games.

“We have three home games that we must take full advantage of. Our fans are very passionate and wherever we go, they are with us. Playing at home is always huge for us with the crowd behind us and conditions that we are accustomed to. It’s just for us to play for all the points and that means taking the chances,” Ricketts said.

The other games in the zone will see Lacovia High in fifth (five points) host second-place Munro College (10 points) and STETHS who are perfect after six games face third-place Maggotty (eight points) at the STETHS Sports Complex in Santa Cruz.