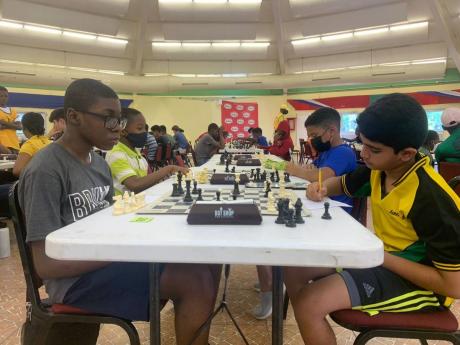 Contributed
Under 12 Absolute champion Zahmir Smikle (left) looks on as Ronak Shergil records his moves during Round 3 of the National Age Group Chess Championships.

Nearly 150 young players from across the island competed at the National Age Group Chess Championships at the University of the West Indies on October 1 and 2.

The players competed in 12 age-group categories ranging from Under-8 to Under-18 as they look to represent Jamaica internationally, including the Central American and Caribbean Youth Championships set to be held in Honduras in November.

The Under-8 category was taken by favourite Emilia-Rose Leake from Creative Kids Learning Academy, who lived up to her billing by producing a perfect 6/6 score to top the Under-8 Absolute section (usually only boys) and also the Under-8 female section. Leake is one of only three females to ever win both the boys and girls section combined in the competition’s history.

St Andrew Preparatory student Liam Logan starred in the Under-10 Absolute Section with a 6/6 score. Second was Vaishnav Gali of Creative Kids Learning Academy with 5/6. Victoria Aung rounded off the Absolute section with 4.5/6 points. Victoria also emerged National Under-10 female champion with a close second going to Esther Mullings of Dunrobin Primary with 3/6 points. Third was Saanvi Paladugu on a similar 3/6.

The Under-12 Absolute section had to be determined by a thrilling playoff as three players tied for first place. Zahmir Smikle, Aaron McKoy, and Ronak Shergill battled it out in a three-way speed playoff after accumulating 5/6 points each. In the end, Zahmir Smikle of Campion College emerged victorious by winning both games. Harrison’s Prep student McKoy was second by regular tiebreaks while the former Under-10 champion Shergill, who attends Porter Centre for Knowledge, was third.

It also took a playoff to break the deadlock in the Under-12 female section. Online champion Danielle Yankana from Stella Maris Preparatory faced off with Dedipiya Sunkara after they both finished with 5/6 points. After two speed chess victories, Yankana won ahead of Sunkara from Campion College. Third place was Victoria Salazar of Hillel Academy, who scored 4.5/6.

More exciting playoffs were in store as J-Loy Chin from St Jago High and Wolmer’s Boys’ Corbin Harvey tied with 5/6 points in the Under-14 Absolute section. J-Loy won the playoffs, while second went to Harvey, and third was Jaheim Smart of Campion College, who finished on 4.5/6.

The Under-14 female section was claimed by recent Olympiad representative and St Andrew High’s Kaia Gayle, with 3.5/6. Woman Candidate Master Zaina O’Conner of Meadowbrook High finished with 3/6 for second, and Jessica Chang of Immaculate High finished third after scoring 1.5/6.

Aayush Jain of Ardenne High took the Under-16 Absolute category with a perfect 6/6 points. He bettered top-rated Candidate Master Jaden Shaw of Wolmer’s Boys, who finished second with 4.5/6. Another Wolmer’s Boys student, John Stephenson, finished third on the same, 4.5/6.

Amy Stephenson from Wolmer’s Girls, who scored 4/6, won the Under-16 female section, while Gabriella Watson of Immaculate High finished second with 3/6, and Hillel Academy’s Suraiya Matandara-Clarke was third, also with 3/6 .

Under-18 absolute favourite Darren McKennis came back from a tough start to win with a 4.5/6 score. His Campion College counterpart Nathan Walsh, who amassed 4/6 points, finished second, and third went to Kamari Stephens of Wolmer’s Boys with 3.5/6.

The lone Under-18 female entrant, Candidate Master Raehanna Brown, after competing alongside the Absolute players, finished with 3/6 points to add to her Online championship win earlier in the year.

The annual event was sponsored by Grace Vienna Sausages.

“I was very impressed with the level of concentration seen from the young children. The growth of the sport was clearly visible,” their representative, Sha-Tara Carter, said.

”I believe that each category winner shows incredible potential and will be a force to reckon with in the region. The future of chess is in good hands,” he said.