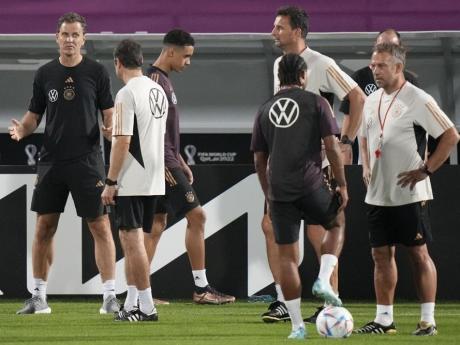 Germany's manager Oliver Bierhoff (left) talks to coaches besides head coach Hans Flick (right) prior to a training session at the Al-Shamal stadium on the eve of the group E World Cup football match between Germany and Costa Rica, in Al-Ruwais, Qatar, Tuesday, November 29, 2022. Bierhoff is the first managerial casualty of Germany’s early World Cup exit after agreeing to resign as managing director of the country’s national soccer teams and academy. The German football federation said Monday, December 5, 2022, that Bierhoff had agreed to prematurely end his contract. (AP Photo/Matthias Schrader, File)

BERLIN (AP) — Oliver Bierhoff is the first managerial casualty of Germany's early World Cup exit after agreeing to resign as managing director of the country's national soccer teams and academy.

The German soccer federation said on Monday that Bierhoff agreed to prematurely end his contract. It was due to run through the 2024 European Championship.

Germany is set to host that tournament but there are concerns about the team's direction after a second successive World Cup exit at the group stage coming after its second-round exit from the European Championship last year.

Bierhoff had a management role with the federation for 18 years since becoming manager of the men's national team in 2004, two years after the former forward's last game for Germany.

He took over all of the national teams and academy in 2018 and received another promotion this year.

“Even if the last tournaments fell short of the sporting goals, he stands for great moments.

His work will always be associated with the World Cup success in Brazil.”