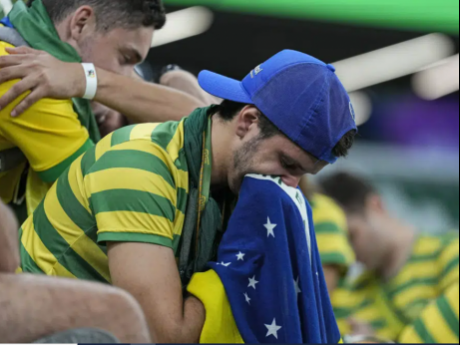 SAO PAULO (AP) — Brazil football fans were shocked into silence back home after the national team was eliminated by Croatia from the World Cup on Friday.

The mood in Sao Paolo and Rio Janeiro was festive at first after Neymar put Brazil ahead in extra time. But then it quickly turned sombre after the Croatians equalised and then won a penalty shootout in Qatar.

Wearing a giant hat in Brazil's yellow and green colour's, 34-year-old engineer Sergio Faria watched the match at a bar in downtown Sao Paulo. He said he was calm at kickoff, certain that Brazil and Argentina would face off in the semifinals.

“It is the most awkward feeling. Croatia shot on goal once, Brazil wasted so many opportunities. It is the strangest Brazil elimination I remember,” Faria said. “But I still don't understand why our coach Tite took Vinicius Junior for Antony, I don't know why Neymar was not the first to take a penalty in the shootout, I can't see why Brazil was not more aggressive.”

Rodrygo and Marquinhos missed their shots in the penalty shootout. Tite, who had already announced he would leave the job after six years as soon as Brazil's campaign in Qatar ended, said at a news conference that Neymar was expected to take the fifth and final spot kick.

But Brazil and Neymar didn't make it that far, with Croatia wining the shootout 4-2.

Neyla Berle, 56, was in tears after the match. The hardcore fan was sitting on the sidewalk of the bohemian district of Vila Madalena, where bars were expected to play samba music into the night if Brazil had gone through.

“We need a foreign coach to fight for titles again. We thought Tite was our best and he delivered another failure. I can't believe we allowed Croatia to score in a counter when we were minutes away from the semifinal,” she said. “Brazil could have avoided this.”

At the official fan festival in Sao Paulo, the atmosphere was solemn. Giovana Arcanjo, 22, was upset not only for herself, but also for her crying daughter Ana Luiza.

“It was very emotional and sad. She had a lot of expectations. Her cellphone lockscreen was the World Cup trophy, her phone cover picture was the players. We thought the sixth title was coming, but it didn't,” Arcanjo said.

Copacabana beach was also one of the venues for tens of thousands of Brazil fans to watch the match. Lucas Santos, 45, was there with his two sons, Eduardo and Henrique, who are 10 and 13 years old. Both children were excited about Brazil's young players and hoped they would bring home the country's first World Cup title since 2002. They will have to wait for another chance in 2026.

“I saw Brazil win two World Cup titles, but it hurts to watch it with your kids, hope they get to see the same, and then it doesn't work. I blame the coach more than these players, because many of them will still be around for another two World Cups and will mature,” Santos said. “Tite brought a lot of strikers, but this match was for midfielders and we fell short.”