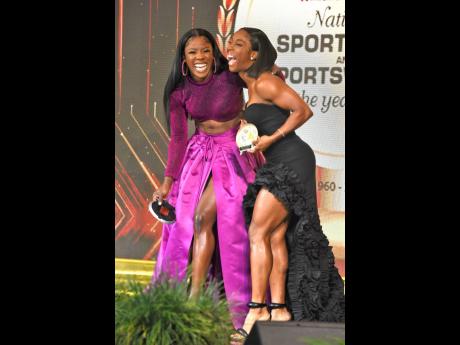 Ian Allen
Shericka Jackson (left) and Shelly-Ann Fraser-Pryce enjoy a light moment during the RJRGLEANER Sportsman and Sportswoman of the Year awards ceremony at The Jamaica Pegasus hotel on Friday night.

GRATEFUL AS she is for her fifth Sportswoman of the Year award, five-time world 100-metre champion Shelly-Ann Fraser-Pryce chose the moment to honour the other nominees in what she called an excellent year for Jamaican women in sport.

Fraser-Pryce won the award at Friday’s RJRGLEANER National Sportsman and Sportswoman of the Year awards ceremony, after a season where she retained the world title in a championship record time of 10.67 seconds, won her fifth Diamond League 100m title, and clocked seven sub 10.70 times, at the age of 36.

The accomplishment was not lost on her but it was a moment where she expressed joy at what the other seven nominees achieved, in particular, world 200m champion Shericka Jackson, who finished as runner-up.

“We were around there and I thought they announced (Shericka) as Sportswoman so I was cheering. I have won many times and it feels good to win, but I would not have felt any way if Shericka won,” Fraser-Pryce said.

“When you take out the competition aspect and look at the body of work, it was remarkable. And I really thought we would have a tie and it would have been awesome to share it with Shericka.”

Jackson won her first world title in a championship record performance of 21.45, the second fastest time in the half-lap event,and won her first Diamond League title. Both women were nominated for World Athletics’ Women’s Athlete of the Year.

According to Fraser-Pryce, so strong were the performances in 2022, anyone could have taken home the prize. That, she says, bodes well for the future of athletics among Jamaican women.

“With the women, we are always showing up but we are taking notice now. We are always the cornerstone of Jamaican sports. To be able to have that season where women stepped up, from Khadija Shaw to Jhaniele Fowler, to many other talented women who continue to dominate in different spaces, is remarkable,” Fraser-Pryce said.

“And I think it adds hope to our other upcoming athletes to know that you can occupy this space with strength, with pride, with courage and know that you, too, can reach the top.”

Describing 2022 as mind-blowing, Fraser-Pryce herself could not fathom how consistent she was, acknowledging the fun that she has had in 2022 and what she still aspires to achieve this year.

“I never even thought that I could be able to run 10.6 consistently, and to be able to was remarkable. To be Sportswoman a fifth time after winning my fifth world title is a great feeling and it is the support [that was key]. I had my family with me in Oregon [at the World Athletics Championships] and it truly made a difference. I was in an environment where I was just happy. It was less about the outcome and more about having fun and pushing myself, challenging myself to do more. And I’m excited for what the future holds as I continue to have that (drive).”