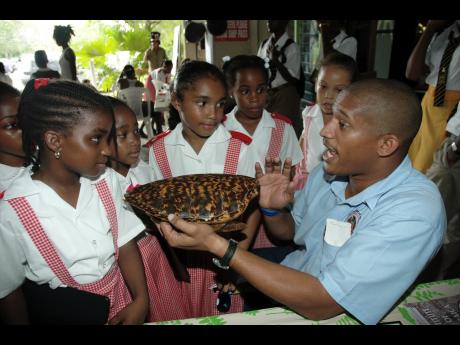 Come this Friday, the scenic Montego Bay Convention Centre in Rose Hall, St James, will play host to the 2015 staging of the Montego Bay Chamber of Commerce and Industry (MBCCI) signature trade show, 'MoBay Expo', and from all indications, it should be a fantastic experience.

The event, which had its genesis in 1990, has been a revelation over the years in terms of showcasing goods and services and creating linkages and other opportunities for players in the business sector. While it is celebrating its 16th year, having become a household name in the business community shortly after its inception, MBCCI

president Gloria Henry says this year's event will be all business and not have a 'sweet 16 Affair.'

"Expo has been a great platform for the Montego Bay Chamber and for the business community in Montego Bay. Over the years, many businesses have had phenomenal exposure via this platform," said Henry. "The focus will be much the same this year."

While MoBay Expo has grown and expanded over the years, becoming a household name in business circles across the Caribbean and North America, its core principles, which are to foster development and create exposure through trade and commerce, have remained intact. "We at the Montego Bay Chamber of Commerce and Industry feel strongly that in providing this facility, we have helped in fostering the development and trade of commerce among CARICOM members and assisted in unifying the Caribbean as a single market in the global marketplace," was how Mary Chambers, who was president of the MBCCI in 1990, summed up the inaugural staging of MoBay Expo.

It should be noted that when MoBay Expo started in 1990, there were only 40 booths, which was hardly enough to fill up the showroom at the Montego Bay Cruise Shipping Terminal, which hosted that staging. Since then, the MoBay Expo has grown significantly, leaving the organisers with no choice but to move the event to the newly constructed Montego Bay Convention Centre for its 2011 staging.

As MoBay Expo has grown over the years, so has its many and varied offerings, which are now much more diversified in terms of both the number of exhibitors, the exhibits, the opportunities to create linkages; and the opportunity for high- school and tertiary students to seek out potential employment opportunities. With the proposed Jamaica Logistics Hub and its many exciting possibilities on the horizon, it could well become a case of the sky is the limit, for MoBay Expo, which is expected to become a conduit in exposing these new possibilities.

While tourism stakeholders have dismissed the notion that the business process outsourcing (BPO) sector is set to take-over as the nation's premier revenue earner, players in the emerging technology-based sector are adamant that, based on their awesome potential, which now includes a stake in the

new-look textile industry, it is only a matter of time before they surge to the top.

According to Henry, with tourism now a "mature industry" in Montego Bay, manufacturing is expected to provide a new opportunity for the diversification of the city's economic base, which is what appears to be driving the enthusiasm among BPO investors.