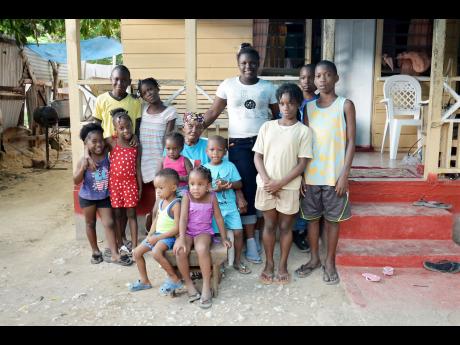 Claudia Gardner
Watson with her grandchildren.

Leanora Watson is one of Hanover's longest-living citizens, and at 105 years old, she is still flourishing and full of verve. Auntie Leah, as she is fondly known in Brissett, where she lives, was born in Mount Peace in the parish to James Watson and Harobela James on February 8, 1912. She attended the Clifton School in an adjoining community. Her mother used to be a field worker at the now defunct Kew Sugar Estate, which was operated by the West Indies Sugar Company, and her father was a livestock farmer.

According to Watson, she worked at the Riley and Georgia sugar estates, where she 'dropped manure and weeded sugar cane' and later did grounds work at the central weighing station in Brissett in Lucea, where she was responsible for keeping the yard tidy and free of cane debris.

Watson also did a stint at the Rusea's School decades ago, where she washed and ironed for the children at the institution, which was a boarding school at the time "during the days of Eric Frater and Mr Newport" she recounts.

"Mi work with them (Rusea's) five years and three weeks, and with west Indies Sugar Company for 17 years at the hoist. I used to pick up drop cane and clean up the hoist yard," she said.

"When I worked up at Rusea's School, I always run round the track. And I used to play bat and ball when I was little," she said in explaining her fitness regimen.

A member of the Lucea Baptist Church for the past 25 years, Watson attributes her longevity to 'the Grace of God'. She is a lover of vegetables and fish and still cooks as well as washes for herself and one of her young grandsons.

"I eat no meat for about two years now. I like string fish and bonito. Me love cornmeal porridge; me nuh love rice. I cook and bathe myself. I cook cornmeal and oats porridge," she explained.

Watson is the mother of four children, 17 grandchildren, 27 great-grandchildren, and six great-great grandchildren. Watson was married once, but says that her spouse, whom she has out-lived, migrated to England and never returned to Jamaica.

She is also sibling to two brothers and one sister, for whom she was primary caregiver while still in her teens.