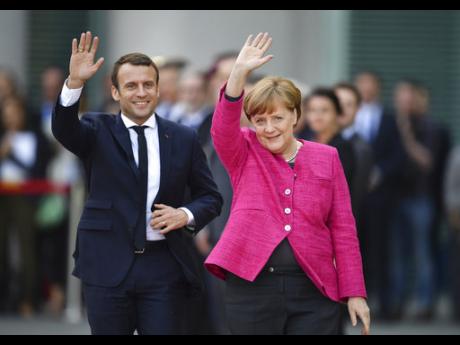 Bernd Von Jutrczenka
New French President Emmanuel Macron left and German Chancellor Angela Merkel wave to journalists at the chancellery in Berlin yesterday during the first foreign trip of Macron after his inauguration the day before.

French President Emmanuel Macron and German Chancellor Angela Merkel pledged yesterday to work closely together to draw up a "road map" of reforms for the European Union, saying that they're both prepared even to implement treaty changes if needed.

The two met in Berlin on Macron's first full day in office, which started with his naming 46-year-old lawmaker Edouard Philippe as his new prime minister. Merkel called Macron's visit an honour and a sign of the deep friendship between the two European powerhouses.

She added that she hoped for a "new dynamism" in German-French relations, saying that "Europe will only do well if there is a strong France, and I am committed to that".

Macron said that he would work with Merkel on a "road map" and that they needed to work on "deep reforms that are necessary and need common work".

Both leaders suggested that they were prepared to change European treaties if needed, but Merkel stressed that such measures were not immediately on the table.

"First, we need to work on what we want to change, and then if it turns out it needs a treaty change, then we're prepared to do that."

The visit to Berlin continued a tradition of French presidents making their first foreign trip to Germany.

A large group of onlookers, some carrying European flags, stood outside the chancellery as Macron arrived.

Germany and France have traditionally been the motor of European integration, but the relationship has become increasingly lopsided over recent years as France struggled economically.

The visit signalled Macron's intentions to move rapidly on campaign promises to revive support for the beleaguered European Union by reforming and strengthening it.