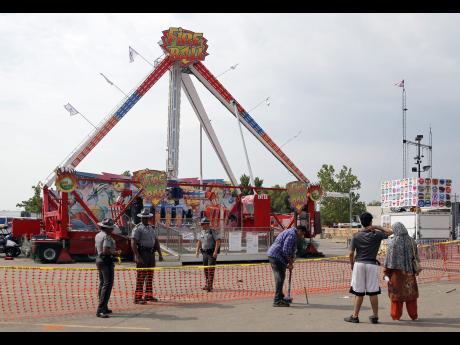 Inspectors repeatedly looked over a thrill ride while it was assembled at the Ohio State Fair and signed off on it hours before it flew apart in a deadly accident that flung passengers through the air, according to authorities and records released yesterday.

Investigators worked to find what caused the opening-day wreck that killed a high-school student who had just enlisted in the Marines and injured seven other people, including four teenagers.

Gov John Kasich shut down all rides at the fair and ordered them inspected again. He said it was too early to say whether inspectors missed something that led to the tragedy Wednesday night.

"It's a nightmare. It's a terrible situation," he said.

Video taken by a bystander of the swinging, spinning Fire Ball ride in action captured a crashing sound. A section holding four riders came apart, and screams could be heard as at least two people were ejected and plunged toward the ground. Other riders were still in their seats as they fell.

Tyler Jarrell, 18, of Columbus, was thrown about 50 feet and pronounced dead on the midway. The Marine Corps and school officials said Jarrell enlisted last Friday and was going to begin basic training next summer after his high school graduation.

The injured ranged in age from 14 to 42. At least two were listed in critical condition. Some people were hit by debris.