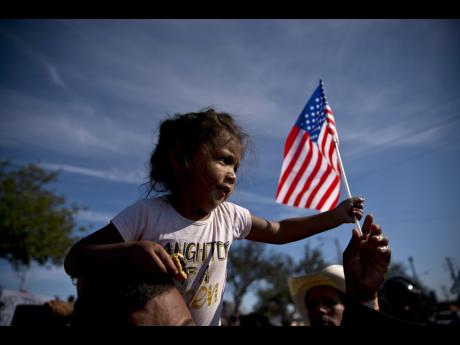 AP
A migrant girl with a U.S. flag sits on the shoulders of a man marching with other migrants to the Chaparral border crossing in Tijuana, Mexico, Sunday, Nov. 25, 2018, as they try to reach the U.S. The mayor of Tijuana has declared a humanitarian crisis in his border city and says that he has asked the United Nations for aid to deal with the approximately 5,000 Central American migrants who have arrived in the city. (AP Photo/Ramon Espinosa)

Many among the more than 5,000 Central American migrants in Tijuana were urgently exploring their options amid a growing feeling that they had little hope of making successful asylum bids in the United States or of crossing the border illegally.

Most were dispirited on Monday, a day after U.S. agents fired tear gas into Mexico to turn back some migrants who had breached the border. They saw the clash and official response as hurting their chances of reaching the U.S.

There was a steady line outside a shelter at a tent housing the International Organisation for Migration, where officials were offering assistance for those who wanted to return to their home countries.

Mina and his wife and their toddler daughter avoided the march and were glad they did after hearing others recount what unfolded, he said as he sat in the doorway of his family's tent at Tijuana sports complex using a toothbrush to clean the fine dust that coats everything off his sneakers.

The events made Mina rethink his family's plan of making it to the U.S. He says he's heard people talk of Rosarito, a beach town popular with U.S. tourists about a 40-minute drive south of Tijuana.

There "you can earn money and live well" if you're willing to work, he said. He set a goal of trying to move his family out of the shelter in another week.

Mexican security forces stepped up their presence at the complex where thousands from the migrant caravan have been sheltered, apparently seeking to avoid a repeat of Sunday's ugly scene.