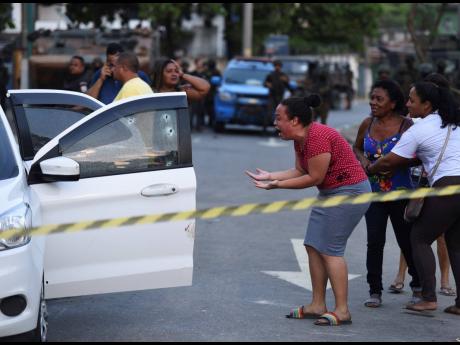 A relative cries out in agony as she looks at the body of Evaldo dos Santos Rosa slumped over inside his car in the Guadalupe neighbourhood, Rio de Janeiro, Brazil, on Sunday. Authorities say soldiers mistook the car driven by Santos Rosa for that of criminals and fired 80 shots at it.

Ten members of Brazil’s military were under arrest yesterday after soldiers fired 80 shots at a car carrying a family, killing a 46-year-man and prompting protests.

Evaldo dos Santos Rosa was driving Sunday to a baby shower with his seven-year-old child, his wife, her stepfather and another woman when soldiers started shooting at them, according to relatives. The stepfather and a passer-by who was trying to help were injured, but the rest of the family was unharmed.

The military initially said in a statement that it had responded to gunfire from attackers. But police said no arms were found in the car, and the military eventually changed its statement.

“Due to inconsistencies between the facts initially reported and other information later received by the eastern military command, we determined the immediate removal of the military [members] involved,” the armed forces said in statement. Ten of the 12 men questioned by investigators were under arrest.

Family members, friends and local residents scheduled a protest yesterday on the stretch of road where Dos Santos Rosa was killed.

Brazil has the largest number of annual homicides in the world, and new President Jair Bolsonaro has vowed to unleash security forces to battle rampant violence. But the armed forces have long been criticised for extrajudicial killings, especially in the state of Rio de Janeiro. In 2018, the police killed 1,534 people in the state, according to government data.