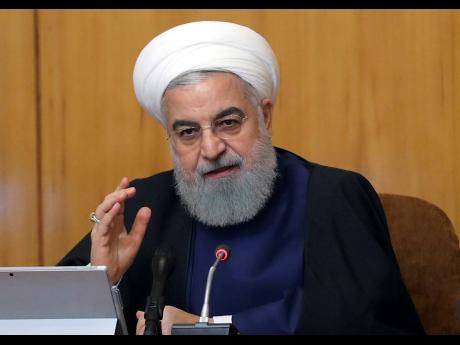 Iran threatened Wednesday to enrich its uranium stockpile closer to weapons-grade levels in 60 days if world powers fail to negotiate new terms for its 2015 nuclear deal, raising regional tensions as a US aircraft carrier and bombers headed to the Middle East to confront Tehran.

A televised address by President Hassan Rouhani, who once pledged that the landmark deal would draw Iran closer to the West, saw the cleric instead pressure Europe to shield Tehran from the sanctions imposed by President Donald Trump withdrawing the US from the agreement exactly a year earlier.

Rouhani’s threats put the world on notice that it cannot continue to rely on Iran complying with terms of the unravelling deal in the coming weeks. Meanwhile, a US campaign of sanctions hammering Iran’s anaemic economy and blocking its sale of oil on the global market is only making life worse, putting further pressure on both its Shiite theocracy and its 80 million people.

Rouhani himself compared the situation to a medical emergency for the Islamic Republic, only 40 years after its founding.

“We felt that the nuclear deal needs a surgery, and the painkiller pills of the last year have been ineffective,” Rouhani said. “This surgery is for saving the deal, not destroying it.”

Iran on Wednesday stopped its sale of excess uranium and heavy water as a first step, Rouhani said, something required under the deal. The US last week ended deals allowing Iran to exchange its enriched uranium for unrefined yellowcake uranium with Russia, and to sell its heavy water, which is used as a coolant in nuclear reactors, to Oman.

In 60 days, if no new deal is in place, Iran will increase its enrichment of uranium beyond the accord-permitted 3.67 per cent, which can fuel a commercial nuclear power plant. Rouhani did not say how far Iran would be willing to enrich, although the head of its nuclear programme again reiterated Iran could reach 20 per cent enrichment within four days.

Once a country enriches uranium to around 20 per cent, scientists say the time needed to reach the 90 per cent threshold for weapons-grade uranium is halved. Iran long has maintained its nuclear programme is for peaceful purposes. However, Iranian state television’s English-language service Press TV, citing sources close to presidency, said the country would withdraw from the Nuclear Nonproliferation Treaty if Europeans sought to sanction Iran at the UN Security Council.

Rouhani also said that if the 60 days pass without action, Iran will halt a Chinese-led effort to redesign its Arak heavy water nuclear reactor. Such reactors produce plutonium that can be used in nuclear weapons.

Iran notified Britain, Russia, China, the European Union, France and Germany of its decision earlier in the day. All were signatories to the nuclear deal and continue to support it. Iranian Foreign Minister Mohammad Javad Zarif met Wednesday in Moscow with his Russian counterpart Sergey Lavrov and offered a letter as well.

“If the five countries join negotiations and help Iran to reach its benefits in the field of oil and banking, Iran will return to its commitments according to the nuclear deal,” Rouhani said.