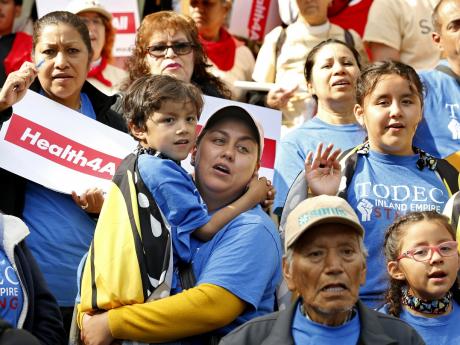 In this May 20, 2019, file photo, Oralia Sandoval, center, holds her son Benjamin, 6, as she participates in an Immigrants Day of Action rally in Sacramento, California. California will become the first state to pay for some adults living in the country illegally to have full health benefits as the solidly liberal bastion continues to distance itself from President Donald Trump's administration. (AP Photo/Rich Pedroncelli, File)

SACRAMENTO, Calif. (AP) — Some low-income adults in California living in the country illegally will soon get their health benefits paid for by taxpayers.

Democrats in the state Legislature on Sunday agreed to make adults between the ages of 19 and 25 eligible for the state’s Medicaid programme.

Not everyone will get those benefits, only people whose incomes are low enough to qualify for the program.

State officials estimate the programme will cover an additional 90,000 people at a cost of $98 million.

The move continues to stake California’s position as a bulwark against the policies of Republican President Donald Trump.

While the Trump administration has worked to weaken the health care law signed by former President Barack Obama, the budget agreement approved Sunday and expected to pass the state Legislature later this week would strengthen California’s commitment to the law known as the Affordable Care Act.

In addition to covering some adults living in the country illegally, California’s proposed $213 billion budget would make the state the first in the country to help families earning as much as six times the federal poverty level pay for their monthly health insurance premiums.

But to pay for part of it, the state will begin taxing people who don’t have health insurance.

It’s a revival of the individual mandate penalty that had been law nationwide under Obama’s health care law until Republicans in Congress eliminated it as part of the 2017 overhaul to the tax code.