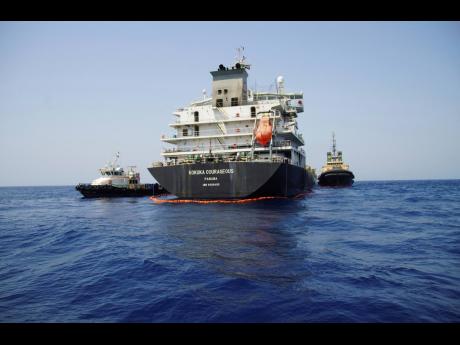 The Associated Press
The Panama-flagged, Japanese-owned oil tanker ‘Kokuka Courageous’ that the US Navy says was damaged by a limpet mine, is anchored off Fujairah, United Arab Emirates, during a trip organised by the navy for journalists on Wednesday, June 19. The limpet mines used to attack the oil tanker near the Strait of Hormuz bore “a striking resemblance” to similar mines displayed by Iran, a US Navy explosives expert said on Wednesday. Iran has denied being involved.

Iran’s Revolutionary Guard shot down a US surveillance drone yesterday in the Strait of Hormuz, marking the first time the Islamic Republic directly attacked the American military amid tensions over Tehran’s unravelling nuclear deal with world powers.

The two countries disputed the circumstances leading up to an Iranian surface-to-air missile bringing down the US Navy RQ-4A Global Hawk, an unmanned aircraft with a wingspan larger than a Boeing 737 jetliner and costing more than US$100 million.

Iran said the drone “violated” its territorial airspace, while the US called the missile fire “an unprovoked attack” in international airspace over the narrow mouth of the Persian Gulf, and President Donald Trump tweeted that “Iran made a very big mistake!”

The incident immediately heightened the crisis already gripping the wider region, which is rooted in Trump withdrawing the US a year ago from Iran’s 2015 nuclear deal and imposing crippling new sanctions on Tehran. Recently, Iran quadrupled its production of low-enriched uranium to be on pace to break one of the deal’s terms by next week while threatening to raise enrichment closer to weapons-grade levels on July 7 if Europe doesn’t offer it a new deal.

Citing unspecified Iranian threats, the US has sent an aircraft carrier to the Middle East and deployed additional troops alongside the tens of thousands already there. All this has raised fears that a miscalculation or further rise in tensions could push the US and Iran into an open conflict 40 years after Tehran’s Islamic Revolution.

“We do not have any intention for war with any country, but we are fully ready for war,” Revolutionary Guard commander General Hossein Salami said in a televised address.

Russian President Vladimir Putin urged caution, warning any war between Iran and the US would be a “catastrophe for the region as a minimum”.

The paramilitary guard, which answers only to Supreme Leader Ayatollah Ali Khamenei, said it shot down the drone at 4:05 a.m. Thursday when it entered Iranian airspace near the Kouhmobarak district in southern Iran’s Hormozgan province. Kouhmobarak is about 1,200 kilometres (750 miles) southeast of Tehran.

The drone took off from the southern Persian Gulf and collected data from Iranian territory, including the southern port of Chahbahar near Iran’s border with Pakistan, the Guard said in comments appeared aimed at showing it could track the aircraft.

The US military has not commented on the mission of the remotely piloted aircraft that can fly higher than 10 miles in altitude and stay in the air for more than 24 hours at a time.

Iran used its air defence system known as Third of Khordad to shoot down the drone – a truck-based missile system that can fire up to 18 miles (30 kilometres) into the sky, the semi-official Fars news agency reported.

Typically, militaries worldwide call out to errant aircraft entering their airspace before firing. It’s unclear whether Iran gave any warning to the US drone before opening fire. The US military says Iran fired on and missed another drone last week near the Strait of Hormuz, the narrow mouth of the Persian Gulf through which 20 peer cent of all global oil moves.

The US military’s Central Command said in a statement that the RQ-4A Global Hawk drone was shot down by an Iranian surface-to-air missile over the strait.

“Iranian reports that the aircraft was over Iran are false,” Central Command said, adding that “this was an unprovoked attack on a US surveillance asset in international airspace”.