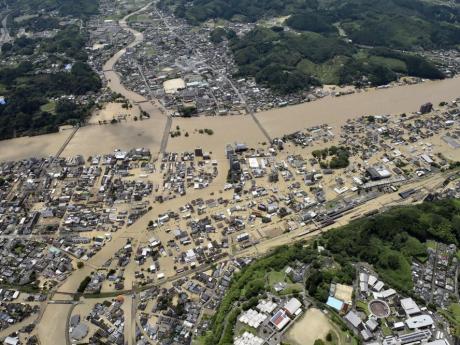 Areas are inundated in muddy waters that gushed out from the Kuma River in Hitoyoshi, Kumamoto prefecture, southwestern Japan, Saturday, July 4, 2020. (Kyodo News via AP)

More than 75,000 residents in the prefectures of Kumamoto and Kagoshima were urged to evacuate following pounding rains overnight.

The evacuation was not mandatory and it was not known how many actually fled.

“I smelled mud, and the whole area was vibrating with river water. I’ve never experienced anything like this,” a man in a shelter in Yatsushiro city, in western Kumamoto, told NHK TV.

He said he fled early fearing a disaster.

NHK footage showed large areas of Hitoyoshi town in Kumamoto inundated in muddy waters that gushed out from the Kuma River. Many cars were submerged up to their windows.

Mudslides smashed into houses and floodwaters carried trunks from uprooted trees. Several people were standing atop a convenience store as they waited for rescuers.

He said three other elderly residents had hypothermia.