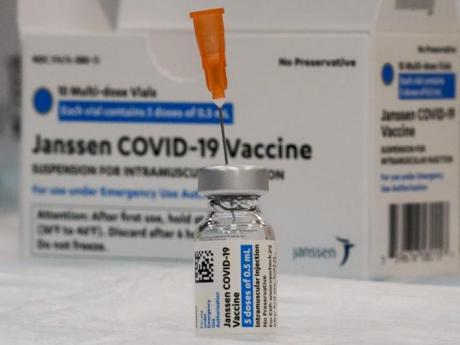 In this April 8, 2021 file photo, the Johnson & Johnson COVID-19 vaccine is seen at a pop-up vaccination site in the Staten Island borough of New York. (AP Photo/Mary Altaffer, File)

Denmark, which has been very cautious with all vaccines, has already taken the AstraZeneca shot out of its vaccination program for the same reason.

Both the J&J and AstraZeneca shots are made with similar technology.

The Danish Health Authority said in a statement that it “has concluded that the benefits of using the COVID-19 vaccine from Johnson & Johnson do not outweigh the risk of causing the possible adverse effect.”

It added that the European Medicines Agency has concluded that “there is a possible link between rare but severe cases of blood clots (VITT) and the COVID-19 vaccine from Johnson & Johnson.”

“As the COVID-19 epidemic in Denmark is currently under control, and the vaccination rollout is progressing satisfactorily with other available vaccines, the Danish Health Authority has decided to continue the national vaccination campaign without the COVID-19 vaccine from Johnson & Johnson.”

Helene Probst, deputy director general at the Danish Health Authority, noted Monday's decision means that Denmark's vaccination calendar will be pushed back up to four weeks.

The decision was made at a meeting Monday in parliament between Health Minister Magnus Heunicke and lawmakers from the different parties.

The vaccines made by Pfizer-BioNTech and Moderna represent the bulk of the jabs given in the Scandinavian country of nearly six million people.

More than 1.2 million residents have either received the first or the two shots, according to official figures.

The J&J vaccine hadn't been in use in Denmark, but there had been plans to administer the shot.

In April, the European Union's drug regulatory agency said it found a “possible link” between the Johnson & Johnson's COVID-19 vaccine and extremely rare blood clots, and recommended a warning be added to the label.

But experts at the agency reiterated that the vaccine's benefits outweighed the risks.

J&J immediately announced it would revise its label as requested and said in a statement: “The safety and well-being of the people who use our products is our number one priority.”

A month earlier, Denmark became the first country in Europe to remove the AstraZeneca jabs from its vaccination programme over a potential link to a rare but serious form of blood clot.

However, the Danish Health and Medicines Authority hasn't ruled out that the shots by the British-Swedish company could be used again.

Norway followed Denmark, and many countries in Europe and elsewhere followed suit.

They later resumed using the shot after the European Medicines Agency said that it was safe but with some restricting it to certain age groups, mostly those above age 50 or 60.

The European Medicines Agency has said the vaccine's benefits continue to outweigh its risks and the vaccine can continue to be administered while a closer evaluation of the blood clot cases continues.