NYC to require vaccines or weekly testing for city workers 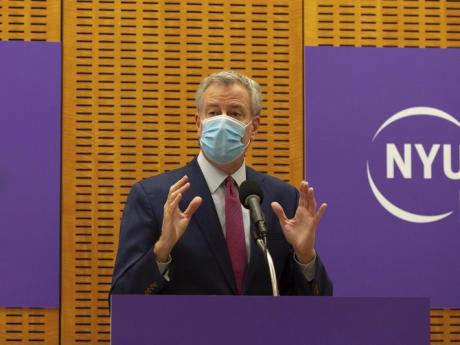 The rule is expected to affect about 340,000 city employees, making the city one of the largest employers in the US to take such action.

While it isn't a vaccine mandate — no workers will be forced to take a shot — officials hope the inconvenience and discomfort of weekly tests will persuade many to overcome a reluctance to get inoculated.

“This is about keeping people safe.”

Hours after de Blasio's announcement, officials in California announced that state employees and all health care workers will be required to show proof of COVID-19 vaccination or get tested weekly.

New York Governor Andrew Cuomo declined to answer a question about whether he will require state employees to be vaccinated.

The September 13 deadline in New York City coincides with the start of public school, when the Democratic mayor has said he expects all pupils to be in classrooms full time.

City healthcare workers and employees in congregate setting such as group homes will face earlier deadlines.

The move comes as the city battles a rise in COVID-19 cases fuelled by the highly contagious delta variant.

Since the end of June, the daily average of new cases has increased by more than 300%.

Last week, the city had announced it was mandating vaccinations or weekly testing for workers in the city's hospital system.

“My message to the private sector is: Go as far as you can go right now,” the mayor said. “I would strongly urge a vaccination mandate whenever possible, or as close to it as possible.”

“Vaccination and testing have helped keep schools among the safest places in the city,” the United Federation of Teachers said in a statement.

“This approach puts the emphasis on vaccination but still allows for personal choice and provides additional safeguards through regular testing.”

But Henry Garrido, executive director of District Council 37 of AFSCME, said, “If City Hall intends to test our members weekly, they must first meet us at the table to bargain.”